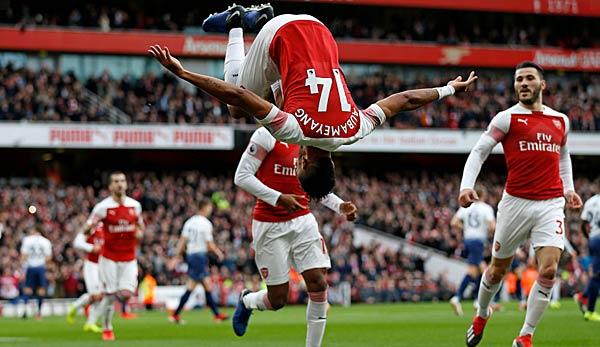 This Wednesday evening FC Arsenal will be at Manchester United (in live ticker and live on DAZN). SPOX will show you where and when you can watch the Premier League cracker on TV, Livestream and Liveticker.

FC Arsenal were able to win the London Derby against Tottenham (4:2) on Sunday without Mesut Özil and are now fourth in the table on points with the Spurs.

Manchester United are less busy this season. Jose Mourinho’s team are on 7th place with 22 points before the 15th matchday, eight points behind Arsenal.

The match between Manchester United and FC Arsenal will take place today, Wednesday 5 December, at 9 pm. The venue is the venerable Old Trafford in Manchester.

The top match of today’s Premier League match day will be broadcast live and exclusively by DAZN at 9 pm. The streaming service costs only 9.99 per month and can be cancelled at any time. If you don’t have a subscription yet, you can get 30 free days here!

DAZN is also often called the “Netflix of Sports”. The streaming service shows top sports from numerous European top leagues, US sports with the NBA, NFL, NHL and MLB, as well as other events such as darts, tennis, UFC and much more.

SPOX also provides a livestream of the game between the Gunners and the Red Devils.

Currently Mesut Özil has a hard time at FC Arsenal. In the last game, the former international had officially suspended because of back problems, but had not seen a minute of playing time in the games before. When asked if coach Unai Emery knew when and where the 30-year-old injured himself, the Spaniard answered narrow-lipped and tellingly: “I don’t know.”

Emery recently explained his decision not to play the midfield director with systematic reasons: “It’s harder to find a place for Özil in the formation we’re currently playing in.”

At the moment there are rumours about a change of Özil in winter. Inter Milan is supposed to be interested in a commitment. At least that’s what the Sun reports.