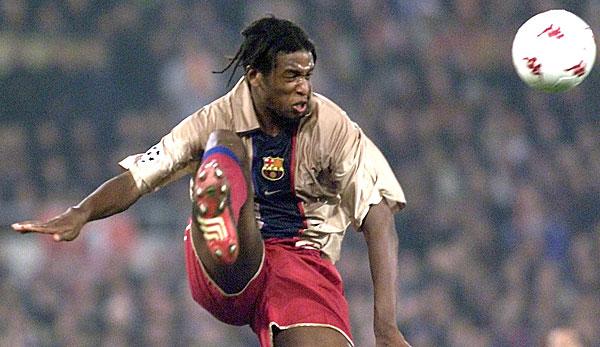 Philippe Christanval was considered the new star of France. He switched to Barca for 17 million euros – and failed because his knee didn’t join in and his psyche didn’t either.

Steeply descending, the stream in front of Philippe Christanval meandered down the mountain between rocks. From up there it looked as if it was much too narrow for a rubber dinghy to be able to sail on it. A little later the Frenchman threw himself with his comrades-in-arms into the wild water, which pushed itself under the boat with a force that he would never have dared from up there. When the wild rafting trip in the French Alps was over, two of his friends had fallen into the water. But Christanval still stood and laughed. “It was really scary,” he later told FC Fulham’s club side. No reason for the 38-year-old not to enjoy the ride down the river.

Because he’s always been someone who needs the action, hates the stagnation. Higher, further, faster. His favorite sport is basketball. He adores Michael Jordan and always dreamed of meeting him once. As a child, he was always out on the street, always on the move, always looking for risk. Once he bet to create a dunk on the basketball court, where the big ones actually play their matches. He took a running jump and flew up to the basket where he stuffed the ball. Risked and won!

He was born in Paris in 1978 and brought with him the talent to be good in any sport. He was constantly exploring his limits. He was the fastest of the school, had a strength you wouldn’t have expected from him, the thin Schlaks, and played basketball so well that at the age of ten he already had an offer from a larger Paris club. He refused, because there was still his second passion: football. There was no one greater than Jordan for him, but when he played, he was even more absorbed in football than in basketball.

He grew up in Sarcelles, a banlieue north of the capital. The majority of the people there come from North and Black Africa and for a long time the place was regarded as a symbol for the isolation of the people in the Paris suburbs and as a social inequality that had become reality. And Christanval loved it here. He felt free when he kicked with his buddies for hours or threw baskets on the hard courts next to which the older ones smoked grass. “If someone had a ball, he whistled and we all ran down,” he remembers in an interview with SO FOOT: “I had some great friends and I loved growing up there.”

Again and again footballers from Sarcelles and the dreariness of the prefabricated buildings make it onto the big stage. Two prominent recent examples are Wissam Ben Yedder, who plays for FC Sevilla, and Riyad Mahrez, who serves as a role model for the kids in his hometown. There they spray his name on the walls. For he is for them the hope of achieving something great, of becoming famous.

Exactly 20 years ago, they sprayed Christanval’s name on the concrete. He had made it to Clairefontaine at the age of twelve, to the legendary football academy. There he matured alongside his good friend Nicolas Anelka and soon became captain. He was given a professional contract by AS Monaco, where he moved to as a teenager in 1994. In 1997 he made his debut under Jean Tigana for the Monegasques and it quickly became clear that there was a player from Sarcelles who was something very special.

At a time when many defenders were rough cleaners, he was elegant, ball-safe and had a good eye. That was always intuitive with him. Just as he had stood his ground against the fine, agile technicians on the football fields, he now also made his decisions as a professional on the field, without thinking much about it. This talent makes him the prototype of today’s modern defenders. With his height of 1.89 meters and his nevertheless smooth movements as well as his eye for situations he reminded of Jerome Boateng.

In 1997, he won the French championship without having had a single effort. In the following season he became a regular and one of the most spectacular defenders of Ligue 1. In 2000 he led Monaco back to the title. At his side were stars such as Fabian Barthez, John Arne Riise, Willy Sagnol, Rafael Marquez, Ludovic Giuly and David Trezeguet, all of whom were formed into champions by today’s Southampton coach Claude Puel. He was considered the coming great in the world champion country.

Shortly after the European Championship title of the Equipe Tricolore he made his debut for the national team, which had three heavyweights in the defence with Laurent Blanc, Marcel Desailly and Lilian Thuram. Nevertheless, the most important sports newspaper L’Equipe wrote: “Christanval belongs to the future. He will not only inherit Laurent Blanc, but will usher in a new era.” At 23, the whole world was open to him. Always higher, always further, always faster. He wanted the next level. When FC Barcelona knocked on the door, everything went really fast. He moved to Catalonia for the immensely high sum of 17 million euros at the time. At that time he was the seventh most expensive player in the history of the club.

Barca had not become champion for three years and upgraded the already strong squad next to Christanval with the sinful talents Javier Saviola and Giovanni. The plan failed, he played most of the time, but in the end you only finished fourth. Too little for a team whose pillars are named Rivaldo, Xavi, De Boer, Kluivert and Enrique. In the summer of 2002, Christanval was about to celebrate his 24th birthday, the crash of the man who loved speed so much and who was still so down-to-earth began, preferring to buy apartments rather than expensive sledges in order to have a second foothold.

Page 1: from the banlieue to FC Barcelona