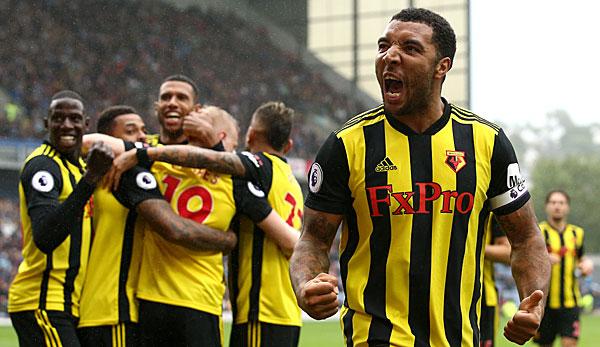 Troy Deeney has a bad childhood, is too lazy for a long time to go far in football. A coincidence changes everything – and his mother’s mania for cleaning. On Wednesday he wants to set a foot with FC Watford in the Carabao Cup Tottenham (21 o’clock LIVE on DAZN).

Summer 2006: A skyscraper somewhere in Chelmsley Wood, a run-down suburb of the English metropolis of Birmingham. The airport is around the corner, the facades of grey buildings old and crumbling.

Whoever comes from here has only two choices: Go right, put on the criminal track, possibly make the big bucks, in conflict with the law. Or go to the left, the decent, legal way, which is much more stony and requires much more perseverance in order to be successful.

Troy Deeney’s from here. This morning he is not in a position to think about his supposedly already built up future. It’s Saturday, yesterday he was out with the boys. Beer in the pubs, whiskey and the hard stuff later in the club. His head is booming. Actually, today he has a game with Chelmsley Town, his amateur club, for which he kicks for fun. Today he has no desire, rather wants to sleep in his intoxication.

Until his mother kicks him out. “She wanted to clean. She still does it that way today, she always cleans on Saturdays,” recalled Deeney, now a cult FC Watford player, Premier League professional and worth ten million euros according to transfermarkt.de, grinning in an interview with Sports Magazine. “She said, ‘You won’t stay in bed all day!’ So I went and played soccer.”

It was supposed to be the beginning of a crazy story that the 30-year-old had never even remotely planned. “It was never my goal in life to be a professional footballer,” Deeney explained. “I was more of an ordinary problem child, got into trouble a lot and chased girls.”

Born in December 1988, Deeney spent his entire childhood and youth in Chelmsley Wood, that focal point suburb of Birmingham. He had a hard time. His biological father left the family before Deeney was born, his stepfather Paul Anthony Burke was notorious in the underworld, always oscillating between prison and freedom.

Nevertheless, the relationship with his stepfather was intimate. “He protected us from it,” says Deeney about Burke, who sold his prison stays to Troy and his two siblings as business trips or vacations.

Deeney’s mother, however, had three jobs to get the children through, and debt collectors kept ringing the doorbell. At some point she had enough, when Deeney was eleven years old, his parents separated. A slap in the face that finally let him flee into the claws of the dubious environment.

He kicked and had talent, but football was only a minor matter. At the age of 15, Aston Villa invited him to audition – but Deeney simply skipped three of the four training days and failed.

“I was 15 and I had a summer vacation. So what do you think I wanted to do? Playing football or going to the park where all the girls were,” he asked in an interview with the Watford Observer. Deeney had problems, left school when he was 14, was allowed to return when he was 15, but left when he was 16, but still without a degree.

He began an apprenticeship as a bricklayer, earning less than 140 euros a week at the rate of 18. And while his younger brother Ellis, now under contract to the Tamworth amateur club, made it to Vila’s junior academy, Troy’s life was bogged down. Until that Saturday morning, when his mother threw him out of the house because she wanted to clean.

Still plenty of alcohol from Friday night in his blood, Deeney dragged himself to the game – and then scored seven goals in Chelmsley’s 11:4 victory. And the coincidence that so often played a role in Deeney’s life meant that a scout from Walsall, the four-league club at the time, was among the isolated spectators. Mick Halsall was his name, the game he actually wanted to watch had been cancelled. So he came to Deeney’s match to watch his son kick in the opposing team.

“To me he was just an old man asking me questions in a pub,” Deeney said about the one who was supposed to change his life. Halsall invited him to a trial training at Walsall, was convinced of Deeney’s qualities. “I just thought, “I don’t even know where Walsall is,” Deeney looked back.

Actually, Walsall was only ten minutes from his home. However, Deeney was not particularly determined to seize the opportunity. On Mondays he was supposed to go to trial training, went out on Saturdays, went out on Sundays. Like Aston Villa, he seemed to let this possibility pass, just to sleep on.

“Monday morning at nine o’clock someone suddenly knocked at the door,” Deeney says. It was Halsall who threw him out of bed, took him to training. “He didn’t have to take that time,” Deeney once said full of respect for his discoverer. “Nothing in his life has changed by improving mine. But he just saw something in me.”

Deeney convinced in Walsall, stayed a week, stayed three months. He scored eight goals in eight games for the reserve, scored eight times for amateur club Halesowen during a two-month loan there. Towards the end of the 2006/07 season, he made his debut in the fourth league for the first team, finally moved up to the third league with Walsall, where he was a regular in the 2007/08 season.

Then Deeney gradually developed his scorer, scoring twelve and 14 goals respectively in the next two third-league seasons. Finally, at the age of 22, in summer 2010, to sign his first big contract: At the time, Watford was a second-league club that he led back into the Premier League in 2015 with 21 seasonal goals and in which the middle striker, who sometimes seems a little too strong, has long been an icon.

He made it. Out of hopelessness, out of the very deep lowlands of English football into probably the best league in the world. A story like Leicester City’s 2016 master hero Jamie Vardy, right?

Not for Deeney at all. “Did you see where Jamie Vardy used to play?” he asked Sports Magazine. “It was nice, they had nice fields, little clubhouses, photos on the wall.” With him, back in Chelmsley, it was different. “We haven’t seen pretty fields, haven’t gotten 50 pounds a game. We had to pay for it ourselves, take our jerseys home and wash them.”

Deeney’s proud to be from Chelmsley. Even if a dark chapter of his life may also be due to how he grew up there. In June 2012, a veteran second division player, Deeney was imprisoned for several months for a discotheque brawl in Birmingham in which he seriously injured a student’s head. Shortly before, his stepfather also died of esophageal cancer. It all came together. An experience that shaped him.

Without the three months in jail he would play for “some amateur club today, get 300 pounds a week and still think I’m the greatest,” he once said. He learned to renounce the right people around him, the wrong friends. “The night the fight took place, I had 20 people in tow. And 200 people stored in my Blackberry. Only five sent me a letter.”

In September 2012 Deeney was back on the loose, Watford’s former coach Gianfranco Zola immediately relied on him again. In the meantime, the 30-year-old has scored 30 goals in 110 Premier League matches for Watford, helped to establish the Hornets in England’s Beletage and wants to set a foot in the spurs of the Carabao Cup on Wednesday evening (9 pm in LIVE-STREAM on DAZN).

Deeney’s matured, knows by now how to place his fame. “I want to inspire people without staging myself like a hero,” he says. “I’m not gonna let this soccer bullshit take me, I don’t think I’m any better than anybody else.”

Deeney bought his mother a house, has children – and understood what matters. “I want people to say, ‘He went to the same school as me, did a lot of crap as a boy, but worked hard and made it out of there.'”

I guess it’s because his mother always cleans on Saturdays.