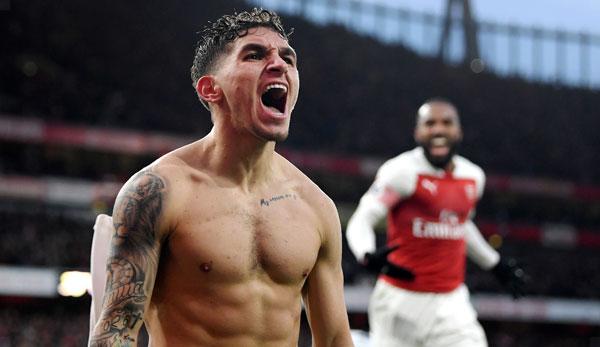 Lucas Torreira has hit FC Arsenal to the hilt, scoring his first goal in the derby against Tottenham Hotspur. On Wednesday, he will be playing with Arsenal at Manchester United (9pm live on DAZN and at LIVETICKER). The story of a winding ascent.

Picturesquely beautiful Pescara lies on the Italian Adriatic coast, kilometres of sandy beaches included. It is spring 2014, temperatures are rising gradually, the World Cup summer is already in the air. But Lucas Torreira has no nerve for all this when he returns to his small apartment with a plastic bag. Contents: two kebabs, each for unbeatable 1.50 euros, from the snack bar opposite. One for his father, one for himself.

At that time, freshly 18 years old, Torreira earned at Delfino Pescara a mere 1,250 euros a month, alone 800 euros for the rent on top. He had to move out of Delfino’s youth academy when he came of age – and now, together with his father Ricardo, who had also moved to Italy, he had to make his way somehow.

The 22-year-old Uruguayan has long since fulfilled the dream he pursued back then, for which he had left his homeland. For 30 million euros he switched to FC Arsenal in the summer and promptly became a key player with the Gunners. And he doesn’t know financial worries like he did in Pescara, anyway, instead of about 300 Euro he earns about 56.000 Euro per week today.

That Torreira would one day be one of the best midfielders of the Premier League was not foreseeable as a child and teenager. On the contrary. Torreira was never considered particularly talented, was not a high-flyer, never played for a junior national team of Uruguay. He kicked at a small club in his hometown of Fray Bentos, a small town near the border with Argentina, best known for its canned meat.

About 280 kilometres from Uruguay’s capital Montevideo, Torreira flew long under the radar for the noble associations there, whether Penarol, Danubio, Nacional or Liverpool. Only at the age of 16 did he stay with the Montevideo Wanderers, so by today’s standards he started training very late, even under professional conditions.

In Montevideo, where Papa and his brother Claudio once tried in vain to become professionals, he lived with his sister and had to make it through the metropolis of millions. He had two jobs, delivered the famous daily newspaper El Pais at five in the morning. Efforts that were to be put to him, but which were to pay off quickly.

In December 2013, a delegation of scouts from the Italian second division club Delfino Pescara visited the Wanderers in search of South American talent. Actually, they only wanted to take four boys to Europe to have them audition. But in the last second they convinced Torreira so much that they even gave five teenagers the chance.

And Torreira also convinced in Pescara, was the only one of the quintet who was allowed to come back for a second trial training – and finally got a contract. At Delfino, where a certain Marco Verratti, compared to Torreira in the meantime, once celebrated his breakthrough, this small, slender but strong boy was chosen.

However, Torreira got nothing as a present, and together with his father he did not keep his head above water for a long time, thanks to the kebab stand opposite. He was not ready for Pescara’s first team, but played for the Primavera team. And had to struggle with painful warts on his feet. “He couldn’t even walk,” recalled Roberto Druda, the scout who brought him to Italy, according to Bleacherreport. “But he just kept playing, for months it went on like that.”

Before he came to Pescara, Torreira was mostly a striker, playing well ahead of today. Former Bayern defender Massimo Oddo, 2014/15 coach of Delfinos U19, changed that: “During the season preparation, the club told me to take a closer look at him. They said: ‘If that’s nothing, we’ll send him back to Uruguay’, he told La Repubblica and went on: ‘I have seen football intelligence, personality and physical strength in him. But he always wanted to have the ball, so I said to him, ‘Why don’t you play as a defensive midfielder instead of offensively?

Torreira made his professional debut in the second league towards the end of 2014/15, when Sampdoria Genoa, a larger club, had already become aware of him. Samp put three million euros on the table for the 19-year-old in the summer of 2015, then loaned him back to Pescara for the following season, where he developed splendidly under Oddo, who has since become head coach of the first team.

When he finally went to Genoa in 2016, where he promptly earned a regular place in Serie A, the 1.68-metre fighter gradually caught the attention of his native Uruguay, where Torreira had never played a professional game before. “I remember how people here in Uruguay suddenly spoke of him everywhere,” El Pais journalist Daniel Rosa told the Bleacher report. “His name was on everyone’s lips: ‘Have you seen this Lucas Torreira?’ The thing he did the most to chat people up was his small height. How can such a small player in Italy, in such a physical league, so stand out?”

Torreira made 71 out of 76 possible Serie A games for Sampdoria in two years, hoisted on the top clubs’ slips and debuted in March 2018 for Uruguay. He was allowed to participate in the World Cup, played the kick-off whistle of the third group match until the quarter-final out against the later world champion France without interruption, and excelled in the successful round of 16 against Portugal and Cristiano Ronaldo.

At first glance, Torreira is a fighter and an aggressive conqueror of the ball in front of the gentleman. She can kick excellently, has an excellent passing game, a good technique, a clever eye and can also anticipate very well, collect many ball wins. “He impresses with his intelligence,” says El Pais journalist Rosa.

He’s done the same thing with Arsenal so far. He has played in all 14 Premier League games of the season, and since the sixth matchday, coach Unai Emery has been calling him into the starting eleven. Torreira also scored his first goal for Arsenal in the North London derby against arch-rival Tottenham, scoring a powerful and accurate 4-2 final.

Afterwards the shy Uruguayan certainly had a nerve for the beautiful corners of London. The budget for dinner was probably more than 1,50 Euro.