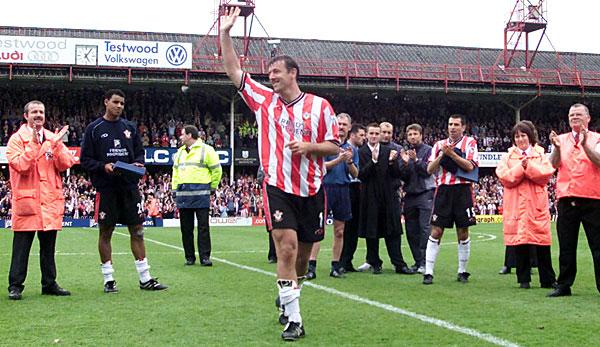 Ralph Hasenhüttl has taken over the coaching position at the Premier League club FC Southampton, making his debut on the bench on Saturday at Cardiff City (4 p.m. in the LIVETICKER). What does his new club stand for and what makes him special?

Southampton FC are South American pioneers, call their club legend Le God and have one of the most productive academies in England. Three short stories.

The team played a total of five games in Buenos Aires. The tour kicked off on 26 June under the eyes of the president against the best association in the country at the time, Alumni. Southampton won 3-0, with Southampton leading 3-0 in their third game against Belgrano Athletic early on after a 10-0 win over a selection of Englishmen living in Argentina.

In the 37th minute, however, Belgrano striker Arturo Forrester shortened the time – and caused a cheering all around the stadium. For the first time, a South American club had scored a goal against a European club. Legend has it that his teammates carried Forrester immediately on their shoulders to the bar of the clubhouse and tipped a few glasses of whiskey together with some fans. The referee shall not interrupt the celebrations and shall instead have finished the first half without further ado. Slightly drunk, the Belgrano players conceded three goals in the second half.

In the days that followed, Southampton celebrated two more wins in Buenos Aires, and one in neighbouring Montevideo against a Uruguayan side, before returning to Europe in mid-July. The pioneers had left an impression, the tour was considered a success and in the following years numerous other English clubs travelled to South America.

International: De Jong on the verge of a record change in summer
Primera Division: Kroos: That’s why I don’t want to become a coach