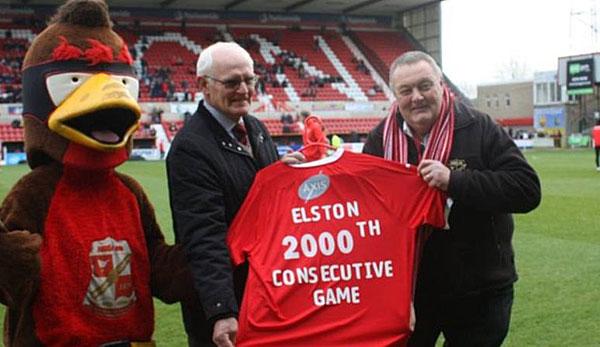 Derek Elston has celebrated a very special milestone in England: On Sunday the fan visited the 2000th game of his favourite club Swindon Town – in a row.

The last time Elston missed a Swindon Town match was on 5 December 1981, and the 68-year-old has been in the game ever since, whether in the FA Cup or the league games. The pensioner, who has played home and away matches against all clubs in the four top English leagues, also experienced a Premier League season.

Swindon Town, who currently kicks in the Football League Two, the fourth English league, honoured their noble fan with a shirt and a cake before the FA Cup match against Woking on Sunday.

“I didn’t plan this, it just happened. I make it easy – I go to football every Saturday and Tuesday,” said Elston, who lives in Northampton, 112 kilometres away. “As long as I stay fit and healthy and enjoy myself, I will continue.”