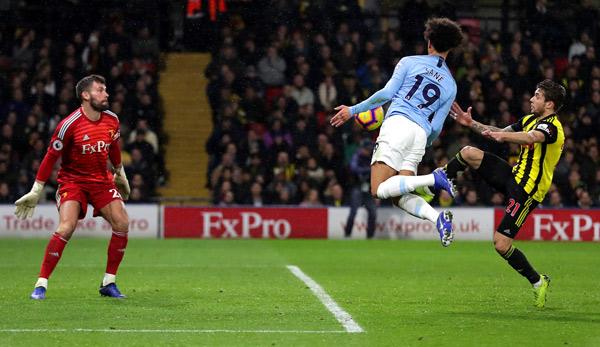 For the former Schalker it was the sixth goal of the season on the 15th matchday of the Premier League. Riyad Mahrez (51st) extended the lead for the favourite in round two before Abdoulaye Doucoure (85th) made it exciting once again. City brought the narrow victory in the end, but despite a storm run from Watford over time.

Team manager Pep Guardiola’s side have increased their lead over their closest rivals FC Liverpool to five points. Team manager Jürgen Klopp’s Reds will play at the penultimate FC Burnley on Wednesday. Chelsea FC, third in the standings, will have to play for Wolverhampton Wanderers, and Arsenal FC, fourth in the standings, will play for record-setting Manchester United (live on DAZN from 9 p.m., the rest of the matches on Wednesday evening).

For German team manager David Wagner, the air at Huddersfield Town is getting thinner and thinner. The team around the former Dortmund player Erik Durm lost 1:2 (1:2) at the AFC Bournemouth and stays in the table cellar. Crystal Palace with the former Schalker Max Meyer will also have to look further down after a 1:3 (0:3) win at Brighton & Hove Albion as well as the promoted Cardiff City after a 1:3 (0:0) win at West Ham United. At West Ham, however, Marko Arnautovic was injured.