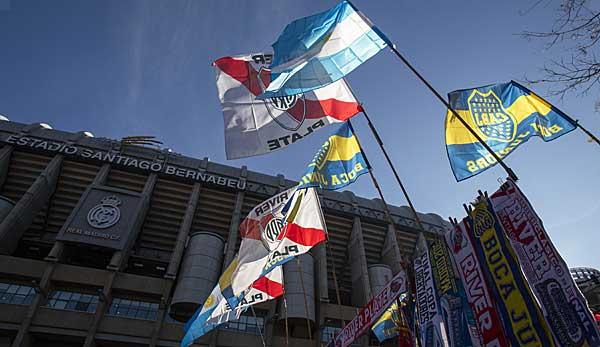 In this year’s Copa Libertadores final, River Plate and Boca Juniors will face each other for the first time in the history of the competition (live on DAZN from 8.30pm). Here you can follow the game in the Liveticker.

This article is continuously updated.

Before starting: The starting position is purely sporty, however, as follows: In the first leg, Boca took the lead twice at home Bombonera. However, because the return leg now takes place on neutral ground, the first leg result is invalid.

Before the start: Although Boca agreed to play the return leg, it remains to be seen whether a defeat in the return leg will lead to a decision at the green table. Boca has meanwhile switched on the CAS and has sued for a nonfighting evaluation of the game in her favour.

Before we started: “They stole the Copa from us,” headlined the sports magazine Ole, joining the drastic words of Argentina’s football legend Diego Maradona. “The CONMEBOL is scum,” he said.

Before the start: “A superfinal of shame!” was the title of the Marca. “The image of Argentine football on the ground,” wrote the Mundo Deportivo. After the scandalous events, Boca President Daniel Angelici applied for the transfer of the second leg and also for it to be played on neutral ground. This request was accepted by CONMEBOL. The return leg was finally scheduled for 9 December. Madrid was chosen as the venue.

Before the start: Actually, the final return match between River and Boca was supposed to take place two weeks ago on 24 November. However, the Boca team bus was attacked by fans of the home team on its way to the River Stadium. Some players of the Juniors were injured and the game was cancelled after some back and forth finally twice, because also on the following day was not played.

Before the start: The final return leg between River Plate and Boca Juniors starts today at 20.30. The game will not be played at the Estadio Monumental, River Plate’s home venue, but at the Estadio Santiago Bernabeu in Madrid.

The Copa Libertadores final return match between River and Boca will not be shown live on Free TV. Instead, the DAZN streaming service will show the Superclasico live from 20:30.

In addition to the Copa’s return leg to the final, DAZN also broadcasts numerous other highlights from the world of sport. Since this season DAZN has exclusively secured the live rights to the UEEFA Europa League and most of the Champions League matches. In addition, DAZN shows weekly all matches of the Serie A, Ligue 1 and the Primera Division, as well as the top matches of the Premier League.

US sports fans also get their money’s worth with the streaming service, after all DAZN shows the top events from the NBA, NFL, MLB and NHL every week. The cost of a subscription is 9.99 euros per month, the first month of which is free. In addition to DAZN, the pay-TV station Sport 1+ also broadcasts the game between Boca and River.

When Boca Juniors meets River Plate, it’s about more than just football. On the occasion of the Copa Libertadores final and the scandal two weeks ago, SPOX looks back on the history of the world’s greatest football rivalry.

After the game was moved from Buenos Aires to Madrid two weeks ago in the wake of the scandalous incidents, the Argentinians were increasingly feeling humiliated. Many fans were furious at CONMEBOL’s decision and called the postponement of the final rematch on Spanish soil the return of the Spanish conquerors from the 16th century to South America.

“It’s as if we were forbidden to dance tango,” said Gustavo Alfaro from the Argentine first division club Huracan, for example. “They stole the Copa from us,” headlined the sports magazine Ole, joining the drastic words of Argentina’s football legend Diego Maradona. “The CONMEBOL is scum,” he said.