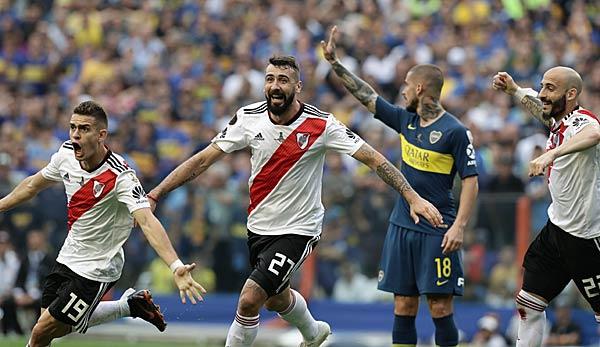 The Superclasico between River Plate and the Boca Juniors finally enters the second round! SPOX provides you with all important information about the Copa Libertadores final and how you can follow it in the LIVE stream.

After the Boca Juniors bus was attacked by fans of rival River Plate in the Copa Libertadores before the final return leg, the game had to be postponed. Originally, the lot was to be played on 24 November. The first leg in Buenos Aires ended with a 2-2 draw.

The Copa Libertadores final return leg between River Plate and the Boca Juniors will kick off this Sunday evening at 8.30 pm. The venue is the Estadio Santiago Bernabeu in the municipality of Chamartin in Madrid.

The DAZN streaming service has secured the rights for the Copa Libertadores final. The transmission of the preliminary reports will start at about 20.20 hrs.

In addition to today’s final, DAZN will also be showing numerous other top-class football competitions, such as Champions League matches and the entire Europa League. In addition, there are selected games from the Premier League, Primera Division, Serie A and Ligue 1.

A subscription to the streaming service costs 9.99 euros per month, whereby the first month is even free. Here it goes to the trial month.

Both teams come from the Argentine capital Buenos Aires, the duel between these teams is considered one of the most famous derbies in the sporting world. The fans see these games as a battle between the layers. Boca Juniors symbolizes the working class and River Plate the upper class.

Unfortunately, violent actions of the spectators are regularly involved in these duels. With River Plate fans stoneing the Boca Juniors bus before the final return leg at the Monumental Stadium, both the date and venue of today’s match were changed.