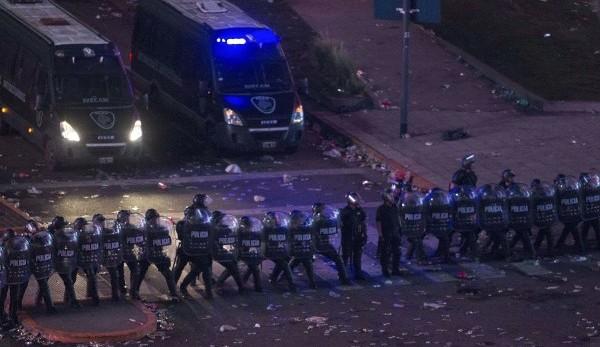 In Buenos Aires, the celebrations have escalated following River Plate’s victory in the Copa Libertadores’ final over arch-rival Boca Juniors (3-1 n.V.). Fernando Gago was unlikely to have bad luck. Guillermo Barro’s Schelotto is about to leave.

Here’s all the news after the final of the Copa Libertadores.

The celebrations after the final in the Copa Libertadores have escalated in Buenos Aires. After River Plate’s victory, the fans turned night into day, but beat each other. In the late Argentinean evening the police therefore took violent action against the supporters and disbanded a riotous group at the Obelisk Square.

According to official information of the Argentine police 20 persons were arrested temporarily, on the part of the police there were three injured. The fans had started throwing stones at the police officers, and the officers reacted with rubber bullets and tear gas.

Despite a limited sale of alcohol and numerous cordoned off streets, the police had had to arrest numerous heavily drunken River Plate followers. However, many other fans spent the festivities peacefully.

For Fernando Gago, returning to Madrid became a nightmare. The 32-year-old injured himself during the match and had to be replaced again. Meanwhile, an Achilles tendon rupture has been detected, making it the third in the career of the Boca Juniors midfielder.

Gago suffered all three tendon tears in the duel with River Plate: In September 2015 and April 2016 he had already suffered the same injury. In Santiago Bernabeu he was substituted in the second half and had to leave the field in the 89th minute. Now another long period of rehabilitation is on the agenda.

Gago had certainly imagined the return to Madrid differently. Between 2007 and 2011 he had been player of the Royals. In October 2017, Gago had forced a cruciate ligament rupture to pause for months.

According to the Argentinian daily Clarin, Guillermo Barros Schelotto will soon leave the Boca Juniors after the Copa Libertadores’ lost final. The coach has numerous offers from the USA, other clubs from South America and Spain.

Schelotto will not renew his expiring contract, so La Boca will have to go into 2019 with a new coach. In 115 games with the Argentinians he collected 62 wins and only had to admit defeat 23 times. His team and his opponents shared the points 30 times.

After the Copa’s lost final, Schelotto was noticeably depressed: “It hurts that we couldn’t bring the trophy home. We are incredibly sad and also think of all the people who have accompanied us in the last days. You’ve always supported us. We all feel great pain.”

Serie A: CR7 with top against Real: “Here no player feels better than others”.
Champions League: Julian Draxler exclusive: “Friends of the DFB-Team know what I do at PSG”