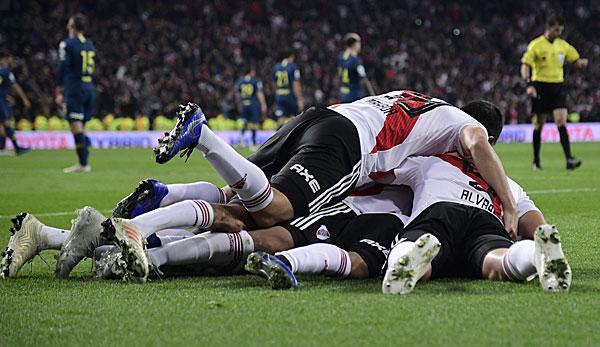 After a few quarrels, the Argentine traditional club River Plate has put on the football crown of South America with a lot of delay and 10,000 km far away from home. 15 days after the Copa Libertadores final return leg in Buenos Aires, Argentina, River Plate triumphed at Madrid’s Estadio Santiago Bernabeu after extra time 3-1 (1-1, 1-0) over city and arch-rival Boca Juniors.

The decision in the 236th Superclasico, whose noisy relocation due to violent excesses had occupied world football for more than two weeks, was made in extra time by Colombian Juan Quintero in the 109th minute with a brilliant shot under the crossbar and Gonzalo Martinez (120.+2).

Dario Benedetto (44) had put Boca in the lead, Lucas Pratto (68) had equalised. Boca defender Wilmar Barrios saw yellow-red in the 92nd minute. The first leg on November 10 had run out 2-2.

Although the game was played as expected, the feared excesses of violence outside the pitch failed to materialise until the final whistle – Madrid instead experienced a South American football party with thousands of fans travelling with them.

The return match between the arch rivals should have taken place on 24 November in the River Plate stadium. The Boca team bus was attacked by River followers during the journey, throwing stones at it and other things, and the windows broke. Several Boca professionals, including Captain Pablo Perez, were injured.

But the South American football association CONMEBOL’s decision to move the derby between Boca, the club of the working class, and “Los Millonarios” to the city with the largest Argentine community outside Argentina caused outrage in the country of the two-time world champion: the term “Copa Conquistadores” (Cup of Conquerors) haunted Argentina – a reference to the Spanish conquerors of the 16th century.

In addition, Boca legally set every lever in motion to be awarded the Copa victory at the Green Table. A case at the International Court of Sport (CAS) is still pending.

For the security forces in Madrid, the classic was simply “the meeting with the greatest risk in the city’s history,” as the newspaper El Pais commented.

That is why, with 5000 policemen, there were almost twice as many people in action as at the Spanish Clasico between Real Madrid, possible final opponents of River Plate at the Club World Championship in Abu Dhabi (12 to 22 December), and FC Barcelona.

Boca began in the stadium of Champions League winner Real against the favorite arch-rivals extremely courageous. River Plate with ex-Nürnberger Javier Pinola in the central defence had more shares in the game, but developed too little goal risk for a long time.

Just before the half-time break, Boca took the lead in a rustically led game after a dream pass from Nahitan Nandez to Benedetto.

After the change of sides, River Plate turned up in front of Argentina’s football idol Lionel Messi (FC Barcelona). After the Uruguayan referee denied the White Reds a penalty kick in the 59th minute, Pratto equalled the score nine minutes later. The majority of the other goals for River Plate were almost only a matter of time.

Primera Division: Dembele apparently already too late again
Serie A: CR7 with top against Real: “Here no player feels better than others”.