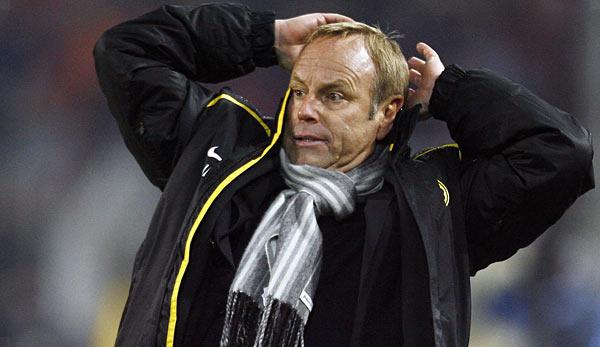 Jürgen Röber is a real globetrotter. As a player, his career took him to Calgary and Nottingham, among others, and as a coach he led Hertha from the 2nd division to the Champions League, before he later moved to Borussia Dortmund, Serbia, Russia and Turkey. The 64-year-old is currently working as sports director for the Belgian first division team Royal Excel Mouscron.

SPOX chief reporter Florian Regelmann met Röber to talk to him about his eventful career. An interview about a special VHS tape, Carlos Dunga, Sebastian Deisler, a bitter time at BVB and a wild story in Belgrade.

In addition: What do the Jakobsweg, the Ryder Cup and Johann Sebastian Bach have to do with Röber?

SPOX: Mr. Röber, when was the last time you played the piano?

Jürgen Röber: Unfortunately, that was a while ago again. My Bechstein grand piano stands in the house of my partner in the Rhineland, her daughter has piano lessons every week and plays fantastically. When I sit at the wing, I always play the same thing: Prelude by Bach. It’s the only thing I can do. (laughs) I should finally take lessons, because music is my passion. I fall asleep with music, I walk with music, I drive a car with music.

SPOX: But of course we want to talk about your second passion today: Football. First, about your remarkable career as a player. How much did your family background influence you?

Röber: My parents fled the GDR, the first years we lived in a camp and I grew up in the Ruhr area. My father worked underground, we didn’t have much money. Of course, it’s the way it shapes us. I was raised strict by my father, but that was a good thing. I always knew what was proper. Later, as a coach, I always tried to pass these values on to my players.

SPOX: Your stations as a player read fascinatingly. Werder, Bavaria, Calgary, Nottingham, Leverkusen, Essen. Who were the Calgary Boomers, please?

Röber: I was so disappointed by my time with the Bavarians. I went to Munich because I wanted to be a national player. I was one of the most dangerous defensive midfielders in Germany and suddenly I didn’t always play.

SPOX: Very briefly: You even scored the goal of the month twice.

Röber: Yes, both times by side puller. And for once, I came second in the Gate of the Year contest. And why is that? Because Daniel Simmes from BVB did an incredible solo run over 70 meters. And who was the last player he played in the sixteenth? I am! (laughs) I would have just had to knock him over, then there would have been penalty kicks and it would probably have been a goal, but the goal of the year would have been mine.

SPOX: But back to Calgary.

Röber: When the offer came from Calgary, I just did it. I came home and said to my then wife, “Honey, we’re going to Calgary.” She burst into tears. But it should be a great time, I’d do it again anytime. I remember Nelson Skalbenia. He was the boss in Calgary then. When he lost interest in the Boomers, the project had already died again after a few months. I was not allowed to return to Germany within a year, so I went to Nottingham Forest. But I would have liked to have stayed in Canada, I would never have left there if the chance had arisen. Life and people were a dream. There it doesn’t matter what kind of house you have, what kind of car you drive, it can’t be compared to here.

SPOX: But it went to England, where you became the “German Fighter”.

Röber: I scored my first goal in the cup in the neighbourhood duel against Notts County. Unfortunately I injured my ankle in a game against Southampton. Kevin Keegan, who was playing in Southampton at the time, even accompanied me to the hospital. I would have liked to have stayed longer, but my wife, who unfortunately died in the meantime, moved back home. So I went to Leverkusen, where I played for almost five years, was captain and had a good time.

SPOX: When we switch to your coaching career: Everything started at Hafenstraße near RW Essen, where you were later named the coach of the century.

Röber: There I slipped into the business as a player trainer. It was incredibly much fun. Unfortunately, we didn’t get the license due to financial reasons, but we became German Amateur Champion, promoted and I led the team to the DFB Cup Final. When VfB signed me up, we were already in the semi-finals. Even today it is something very special when I come to Essen and how the people there welcome me. Over the years I had the idea a couple of times to lead the association up again, but unfortunately such a project could never be realized. That’s a shame.

SPOX: You went to Stuttgart and made your debut at a temperature of minus 28 degrees in the Olympic Stadium in Munich. Also the Bavarians had a new coach in this game: Franz Beckenbauer. But VfB won the game.

Röber: Because I played four-chain and Franz was surprised.

SPOX: How did you get the idea?

Röber: I was one of the first to have it played, but I had a soft spot for it and I knew above all that I had the right people for it with Thomas Berthold and Guido Buchwald in the middle and Thomas Strunz and Michael Frontzeck on the outer positions. Slobodan Dubajic we pulled before the defense, the plan worked perfectly. Nevertheless, Guido came to me before the game and said, “Coach, do you really think this is going well?” I was fine. Just as it often went well for me against the Bavarians, we also beat them with Hertha and Dortmund. When I met Franz on the golf course, he just said, “You again.” (laughs)

SPOX: What many don’t have on their screens anymore: They put together the magic triangle then.

Röber: That’s right. Once I found a VHS cassette in a cupboard of Dieter Hoeneß, who was manager at VfB, where Krassimir Balakow could be seen. I said to Dieter: “There’s a player on it, he’s so good, why don’t you get him?” I watched Bala again in Lisbon before we bought him. And I had seen Fredi Bobic at a game in Meppen when I was still a coach in Essen. He also played with the Kickers outside the front door, we had to fetch him.

SPOX: But then you didn’t get the chance to train Balakow, Bobic and Giovane Elber because your time in Stuttgart ended. What’s the matter with you?

Röber: In the end, my problems with Gerhard Mayer-Vorfelder broke my neck. I have not been afraid from the beginning to tell MV the opinion. After the victory in Munich I was quoted to the ministry. MV really wanted us to party together if we won. But I told him I’d decide for myself. And if there’s my best friend who I can barely see, I want to have dinner with him. So we immediately had some stress and later he kicked me out. Who came after that again?

SPOX: Jürgen Sundermann and then Rolf Fringer on a temporary basis.

Röber: I was already annoyed at the time that I couldn’t work with the troupe I had put together.

SPOX: Nevertheless, you worked with big stars in Stuttgart. Carlos Dunga comes to mind right away.

Röber: I will never forget my time with Carlos. I remember when we were in training camp and Carlos was really always running after us. I was a fitness freak and I told him: “Carlos, if you keep following, you won’t play. I don’t care if you want to go back to Selecao, you don’t play like that.” I tortured him, he played an outstanding second half and then led Brazil to the World Cup title as captain in the USA. When he played in Japan after his VfB time, he called me, “Coach, I’m still running.” Such experiences are the most beautiful.

Page 1: Röber about his surprise coup against Emperor Franz

Page 2: Röber about the fog game, Deisler and the Serbian bus driver

Page 3: Röber on the Way of St James and cruel games in Belgium