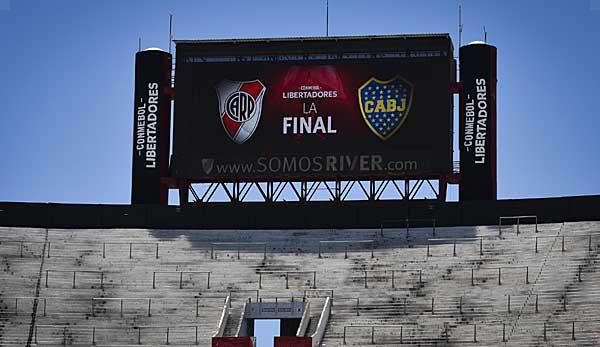 Due to the explosive security situation, the stadiums of the two Copa Libertadores finalists in Buenos Aires will remain closed on Sunday during the final rematch (live on DAZN from 20:30). Neither the River Plate arena nor the Boca Juniors stadium was released for public viewing events.

The fans, on the other hand, can celebrate the winner of the explosive duel at their usual venue. The “Obelisco” on the centrally located Plaza de la Republica was opened by the authorities for the fan storm of the winning club.

On Sunday, city rivals River Plate and Boca Juniors will be crowning the champions in South America’s premier league after a 2-2 first leg draw in far-flung Madrid.

“We want people to be able to celebrate in peace and quiet, and we will not tolerate any act of violence,” promised the new head of the city’s security ministry, Diego Santilli. The game at the Estadio Santiago Bernabeu begins at 16.30 Argentinian time.

The return leg, originally scheduled for 24 November, was postponed due to River fans’ throwing attack on the Boca team bus, then cancelled and finally transferred to the Estadio Santiago Bernabeu in Madrid. However, Boca has already moved to the International Court of Sport (CAS) because of the incident in order to receive the title at the green table.