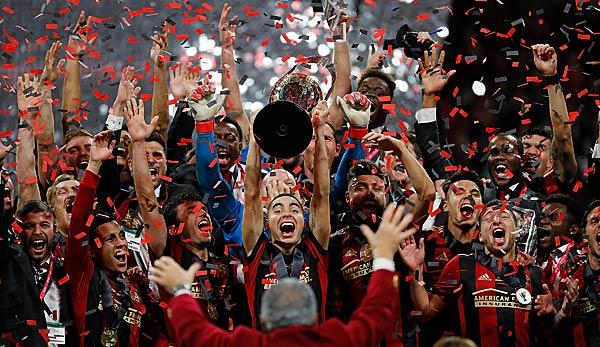 Julian Gressel and Kevin Kratz were the first Germans to win the MLS championship title with Atlanta United. Atlanta beat Portland Timbers 2-0 in the final and won the MLS Cup for the first time in their second year of existence.

“I’ve become a better person and a much better player in the last two years. When I look back later, those were perhaps the two most important years of my football career,” said midfielder Gressel.

The goals in front of the MLS record backdrop of 73,019 spectators in the Mercedes Benz Stadium in Atlanta were scored by record scorers Josef Martinez (39th) and Franco Escobar (54th). “This is for the city, for the fans. It was an extraordinary atmosphere. It’s incredible,” Gressel said.

“First and foremost, it’s enormous for the city,” said United goalkeeper Brad Guzan after the first major professional title for the capital of Georgia since the Atlanta Braves baseball team won the World Series in 1995.

Gressel played against Portland for 90 minutes, Kratz sat on the bench for the whole game. The Middle Franconian is the first German to be used in an MLS championship final. The successor to the American Soccer League, which Franz Beckenbauer won three times with New York Cosmos (1977, 1978, 1980), was first played in 1994.

The first Germans to win the Soccer Bowl in the NASL in 1981 were goal scorers Karl-Heinz Granitza, goalkeeper Dieter Ferner, Ingo Peter, Paul Hahn and Arno Steffenhagen with Chicaco Sting. In 1984 Granitza, second in the eternal scoring list of the NASL behind Giorgio Chinaglia, won the title again.