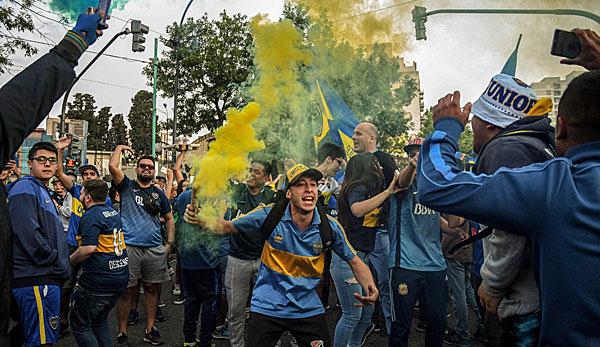 On Sunday, the Copa Libertadores final will take place between the Boca Juniors and River Plate (20:30 live on DAZN) – on European soil, in Madrid. The Superclasico becomes a high-risk game. SPOX provides a long lost overview.

The Superclasico – bigger than El Clasico (Real Madrid vs. FC Barcelona), as the name suggests. Far more important than the district derby between the BVB and Schalke. It’s unimaginably more dramatic than Celtic versus the Rangers. Boca versus River, which means working class versus upper class.

The fight of the classes is unfortunately also held in the context of these meetings again and again next to the place. Under the guise of being a fan, people insult each other, beat each other and kill each other.

What happened? Before the return leg at River Plate’s Estadio Monumental, River fans attacked the Boca Juniors team bus on its way to the stadium. Stones flew, slices shattered. Some Boca players suffered cuts, others caught tear gas, which had been used by the police and penetrated through the broken windows of the bus.

After hours of consultation, the South American football association CONMEBOL decided to cancel the match. The association then decided, with the support of FIFA, the Spanish Football Federation RFEF and Real Madrid, to host the match at the Estadio Santiago de Bernabeu in Madrid.

How did clubs, fans and experts react? “The CONMEBOL is scum!” Argentina’s soccer Goat Diego Maradona was not alone with this opinion. Both Boca and River appealed. Who’s gonna be able to afford that? CONMEBOL must defend itself against accusations of corruption and greed for money. There’s talk of a “disgrace.”

The sarcastic term “Copa Conquistadores” (Cup of Conquerors) haunted the outraged football of Argentina – in reference to the Spanish conquerors of the 16th century. The transfer of the Superfinals to Madrid meant a repeated humiliation.

Between 1998 and 2016, Mexican teams, i.e. teams from Central America, were also allowed to take part in the Copa. Three clubs made it to the final. Both River (2015 against Tigres) and Boca (2001 against Cruz Azul) have already played a Copa final outside South America. In Europe, however, such a game has never before taken place.

Why did CONMEBOL choose Madrid? But why Madrid? After all, Doha (Qatar) and Miami (USA) also offered themselves as venues. There are several reasons for choosing the Spanish capital.

What role does violence play in the Madrid final? In spite of the relocation of the venue, the responsible persons are preparing for a high-security game. The Spanish national police expect around “500 particularly violent fans”. Police commanders spoke of the most risky encounter in the history of the city.

An interview with River President Rodolfo D’Onofrio in the Marca highlights the danger potential of the game: “I’ve received death threats, as has my family. If I showed my cell phone, you’d probably find 200 to 300 threats from Boca fans on it – just from the past few days.”

Page 2: Madrid prepares itself for the threat of violence