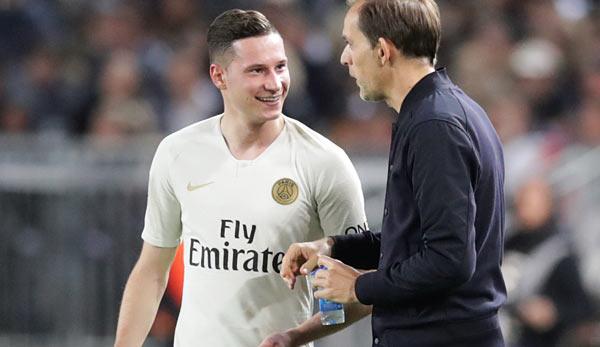 Julian Draxler has been playing with Paris Saint-Germain for a year and a half and believes that the media and the public in Germany have a false impression of him. In an exclusive interview with SPOX and Goal, the international talks about his standing in Paris, his collaboration with coach Thomas Tuchel and the qualities of his colleagues Kylian Mbappe and Neymar.

He also reflects on the state of the national team and explains why it is sometimes even better to leave him on the bench.

SPOX/Goal: Mr. Draxler, was the start to the current season the most important one for you since you moved to Paris?

Julian Draxler: No, not really. Every season is important, so it’s not a special situation. But of course it’s not that easy here. We have a lot of good players, so you have to find your place in the team first. For me it was hard at the beginning of this season, because I came back from a failed world championship with the German national team. I first had to find my way with the new coach and the new players. At the moment I feel good, I play a lot and I am happy.

SPOX/Goal: Where do you feel most comfortable on the pitch?

Draxler: One of my strengths is that I can play on many positions. But I would say that the best position for me is the eight – especially in the team we currently have. As you know, the three attackers we have are not so bad. (laughs) So it’s not easy to play a good role in the attack line. I feel very comfortable on the eight and in the midfield. During the last games I even played more often on the six, that’s okay for me too. I’m very comfortable with ball, I’m an intelligent player and maybe that’s why I get playing time.

SPOX/Goal: At the beginning of the season, you didn’t play that often, but you did meet your expectations in each of your bets. How do you rate the trust the trainer gives you?

Draxler: At the beginning it wasn’t that easy: I didn’t know the coach and he didn’t know me either. The good thing is that we’re both from Germany. That way we could talk a lot. Now I know what he wants me to do. That’s what I’m trying to bring to the square. At the beginning of the season I unfortunately had to struggle with some injuries and as already mentioned, it was not easy after the World Championships. If he set me up, I didn’t play well either, that’s part of the truth. But now the coach has confidence and that’s why I play more often.

SPOX/Goal: How does Tuchel lead the team?

Draxler: I like that he protects us from the media. For example, after a bad game, he says, ‘Okay, it wasn’t that bad, but we could have done better’. He always puts the positive aspects of a game in the foreground. But you can be sure that Thomas Tuchel can also be completely different in the cabin. He demands a lot from his players – and if we don’t perform well, he’s mercilessly honest with us. Every player knows what to do on the court. And if someone doesn’t do his job, the coach can get very angry.

SPOX/Goal: Against Liverpool, the team have shown good morale, which they have sometimes missed in the past. Do you think the team has taken the next step in its development?

Draxler: In the second game against Liverpool, we showed that we can also fight. In the Champions League this is very important because all teams play at a very high level. Games like the one against Liverpool cannot be won by football alone. You have to fight. We’ve shown that in this game, but in the King’s Class you have to show in every game that you’re ready to go to your limits.

SPOX/Goal: PSG have a first final in Belgrade against an opponent neither Liverpool nor Naples could win. How does Tuchel prepare the team?

Draxler: We must prepare just as we did against Liverpool. Like you said: It’s like a finale. We have to win there or score at least one point. We have seen the games of Liverpool and Naples there, it was very difficult for them. It’s going to be tough for us too, but we beat Liverpool at home and we have big players on the team. I’m sure we’ll win there and move on to the next round.

SPOX/Goal: After the 6-1 win in the first leg, is there any danger of underestimating the opponent?

Draxler: No, that’s not gonna happen. It’s gonna be a completely different game. We know that we’ve been very strong in Prinzenpark so far, but we’ve had some problems during the last games, including Ligue 1. So we know it won’t be easy. But if you want to go far in the Champions League, you have to win in Belgrade.

SPOX/Goal: Some people think the lack of competition in Ligue 1 is problematic. What do you think of that?

Draxler: That’s hard to say. We can’t change things here in France. I think we have good opponents in the league, too. But of course we are by far the best team when you look at the quality of the players. That’s a fact. Since we cannot change the circumstances, we must concentrate on ourselves. We have to prepare physically and mentally for all the big games that are coming up. We are professionals and we can’t change the league and the level of the opponents, so we have to focus on what we can influence. I am sure that this time we will do better than two years ago, for example.

SPOX/Goal: What has your interaction been like with Neymar since he took on the role on Ten?

Draxler: We know that Neymar has incredible abilities. He’s a big player, we’re always looking for him on the court – whether he’s playing outside or centrally on the ten. It is not important to him which position he is positioned in. He’s always trying to be all over the place. It doesn’t make much difference to us. If you have a player like him on the team, you have to give him the ball. That is currently also part of my role. I try to defend well together with Rabiot, Marquinhos or Verratti and then pass the ball to Neymar or Mbappe because both are very dangerous players. You can score out of nowhere.

SPOX/Goal: Kylian Mbappe finished fourth in the Ballon d’Or poll. In what areas does he need to improve to win the trophy?

Draxler: That’s difficult to say. He’s already a world-class player, but he’s only 19 years old. To win the Ballon d’Or, you need a little experience. If he continues as before, he will win it one day – I’m sure of that. I’ve never seen a player his age play at such a level before. He has already won the World Cup and it would be good for us if he could win the Champions League. So if you ask me, next year he will win the Champions League with PSG. And then he can get the Balloon d’Or next year.

SPOX/Goal: Who will win a Balloon d’Or first? Neymar or Mbappe?

Draxler: I don’t know. That always depends on several factors: From the form, the performances over the whole season, the performances of the whole team. Besides, it always takes a bit of luck. Both are incredible players and both deserve to win the Ballon d’Or one day. You never know. This year Luka Modric was the winner, nobody would have expected that before the World Championship.

Page 1: Draxler about his position, Tuchel, Neymar and Mbappe

Page 2: Draxler on Verratti, Rotation and the National Team

International: Riots in Buenos Aires after River victory
Soccer international: Zoran Barisic at NK Olimpija Ljubljana before being kicked out