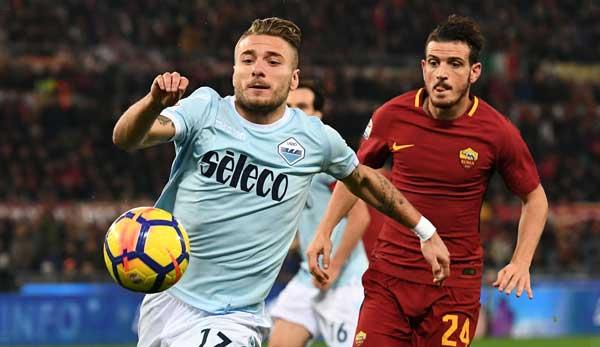 On the 32nd matchday, Lazio Rom will welcome AS Rom to the 148th Derby della Capitale (8.45 pm live on DAZN). The signs could not be more different: While the Roma performed a football miracle against Barca during the week, Lazio experienced a debacle in the Europa League. SPOX tells you what you need to know about the City Derby and where you can follow the game live.

Not only the battle for the Scudetto between Juventus Turin and the SSC Naples is as exciting as it has been for a long time in the Serie A. Also on the places behind it it goes closely. With Lazio, Inter and AS Roma, three teams have 60 points seven games to go. The Derby della Capitale between Lazio and the AS is therefore all about the battle for the coveted Champions League places.

The Roma should at least have the psychological advantage. The Giallorossi performed a real football miracle in the Champions League, when they made up for a 4-1 draw from the first leg by beating Barcelona 3-0 at home to reach the semi-finals for the first time ever.

The big city rival, however, experienced the exact opposite two days later in the quarter-final return leg of the Europa League. Lazio lost 4-2 from the first leg and retired after a 4-1 defeat in Salzburg – debacle instead of wonder.

The DAZN streaming service has secured the broadcasting rights for Series A. At least in Germany, therefore, there is no conventional TV transmission of the game.

DAZN is a live streaming service specialising in the broadcasting of up to 8,000 sporting events per year. In addition to top international football from the Premier League, Primera Division, Ligue 1 and Serie A, the streaming service also offers numerous top-class matches from the North American professional leagues NBA, MLB, NFL and NHL.

A DAZN subscription costs 9.99 Euro per month and can be cancelled at any time. The first month is free for testing.

If you can’t see the Derby della Capitalel between Lazio and AS Roma in the live stream, you’ll still be on the ball with the LIVETICKER from SPOX.

What Ciro Immobile is to Lazio Rom, Edin Dzeko is to AS Roma. Both strikers are currently playing an outstanding season and are among the most important building blocks of their coaches. Immobile scored 39 times in 42 games and were also well worth seeing in the second leg against Salzburg. Immobilies Tore did not change the Romans’ elimination from the Europa League.

The case is different with Dzeko. The 32-year-old Bosnian international was the guarantor of the “Miracle of Rome”. In the first leg against Barcelona, Dzeko scored the crucial away goal. In the return leg, he scored 1-0 after just six minutes and opened the Romans’ race to catch up.

Three of the last five duels went to AS Roma. The AS also won the last Derby della Capitale 2:1. However, Lazio won two games in the semi-finals of Coppa Italia last season.