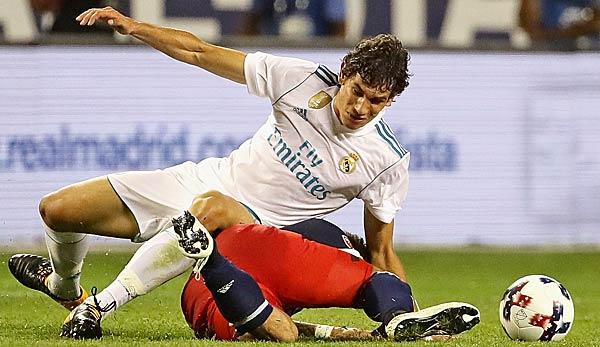 Jesus Vallejo was one of the discoveries of the past Bundesliga season. On loan from Real Madrid, he matured at Eintracht Frankfurt to one of the best central defenders of the league. Convinced of his achievements, Real brought him back in the summer – where he usually follows the action from the stands. What’s the matter?

When Vallejo returned to Madrid in the summer, he was full of hope of winning through the Royal League while learning a lot from the experienced players. “Being part of the preparation tour in America and getting to know my new colleagues was great,” he concluded very positively after the first weeks.

After the convincing season, the chances of operating times were not bad, especially since the youngster’s skills were now apparently convinced in Madrid after two rentals. Then came the departure of Pepe, whose Rückenumer took over 3 Vallejo.

“This is the number Pepe left behind. There were other numbers available, but it’s always good to wear the number that other great defenders of such a high standard have worn,” Vallejo said back then.

It seemed to have arrived in November 2017. Between the 11th and 15th matchday he played his first three league games under Zinedine Zidane and convinced the critics right away.

At the time, however, he did not want to give much to the hymns of praise: “They make me happy, but my way is not to rest and to stay on track. I don’t want to lose the connection. “I know it’s not easy playing with so many big players at my age, but that doesn’t stop me.”

However, this positive phase did not last long, as the three games were to remain his only bets in the league. He did not appear in the Champions League, only in the cup he was allowed to appear a total of four times.

An essential reason for the few operating times is Vallejo’s susceptibility to injury. Already at Frankfurt he missed a large part of the second half of the season. At Real he suffered a muscle injury during preparation and missed the start of the season. Shortly after his first deployments followed a thigh injury, which put him out of action until the beginning of March.

In total he missed 13 games due to the injuries, in addition there were several games in which he was not considered in order to avoid a too fast load.

At the same time, he seemed to mean these words seriously, he actually worked in a very focused way. Before playing, he turns his mobile phone off almost two days in advance to concentrate fully on the sport. He also got along very well with the other players.

But this focus did not help Vallejo, because it was not the injuries alone that kept Vallejo’s operating times to a minimum. His coach Zidane’s principles also prevented further games.

He hardly integrates the newcomers into his team. In their last match against Eibar, only a summer transfer was in the squad with Theo Hernandez, Vallejo was once again in the stands with the others. President Florentino Perez did not like this ignorance of the newcomers at all, which is why he allegedly messed with his coach. Perez was certain in the winter: “We have young players who will soon become important. We want to enjoy our current squad.”

Perez is considered a great advocate of Vallejo. Allegedly he scouted him personally once and finally hired him from the second division club Zaragossa. Perez believed that Vallejo could become a very important player for Real and the Spanish national team.

This prognosis does not seem to be true, as Vallejo is the player with the fewest minutes of betting in the Madrid squad. Even if Vallejo makes it into the squad, his chances are slim, as Zidane is not a fan of many changes. Already eight times this season, he did without a third exchange of players. The play practice of the new entrants remains so extremely small.

Under these conditions, there seems to be no future for Vallejo in Madrid, especially if Zidane stays with Real beyond the end of the season.

Another loan transaction seems unlikely after he got his chance in the first team. Already after the difficult start of the season there were rumours about a return to Frankfurt, where they wanted to keep him in the last season. But both Eintracht and Vallejo denied the intention to change, Vallejo wanted to prevail.

Now the situation seems completely different. Whether there will be a return to Frankfurt is questionable. However, it seems impossible to remain under Zidane.