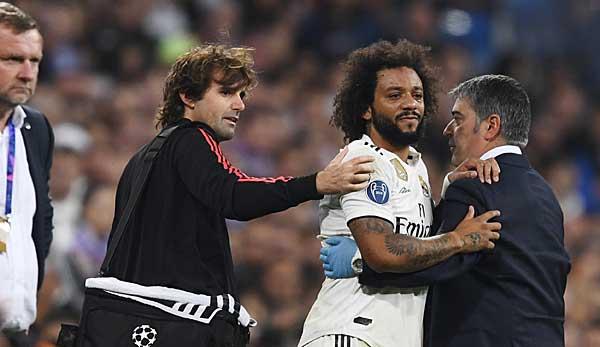 Real Madrid defender Marcelo has caught up to a settlement with the media after the liberation strike with the royals in the Champions League against Victoria Pilsen.

“It’s hard not to win, but you always talk about a crisis, as if you want to hurt the team,” said the Brazilian after his 2-1 win on Tuesday, which ended the title defender’s five-game win-less series.

The 30-year-old, who himself played a big part in the end of the downward spiral with his goal for the 2-0 win, spoke himself into a rage: “All journalists try to hurt us, maybe you’re jealous because you can’t play football,” raved the left-back.

At the same time, he contradicted rumours in Italy that he was striving for a change to Juventus Turin.

“I didn’t listen to any offers, I’m happy at Real,” the 30-year-old confirmed, and immediately made the ultimate profession of loyalty. “There is no one greater Madridista than I.”

Even the coach Julen Lopetegui, who has come under heavy criticism, can take a deep breath after his success.

Club director Emilio Butragueno confirmed after the game to the Spanish broadcaster Movistar that the Basque, who was only established in the summer, will definitely be on the bench at the Clasico against FC Barcelona on Sunday (from 16:15 in the LIVETICKER and LIVE on DAZN).

“We’ve heard the rumors, but continue with optimism. In this situation, it’s important to stay calm and trust the players,” said Butragueno: “The game on Sunday motivates a great performance.