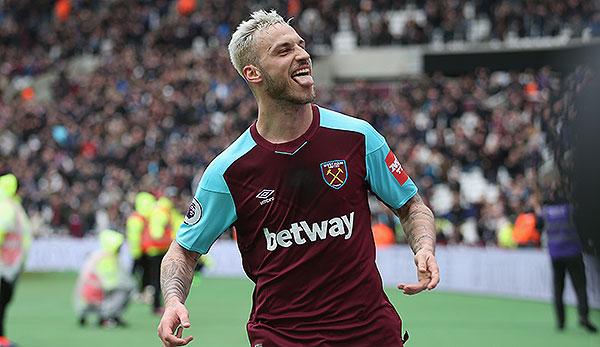 Marko Arnautovic is currently in an impressive form. The ÖFB team player has scored nine goals in the Premier League for his club West Ham United since December and is now even compared to Zlatan Ibrahimovic by his coach David Moyes.

The coach admits that he initially had his doubts about the Austrian’s qualities. “I had my doubts that I saw him play from time to time when he was still at Stoke (West Ham – Stoke, today, 9:00 pm live on DAZN) and in my opinion he didn’t work backwards enough,” Moyes, who took over the coaching position at West Ham from Slaven Bilic in November, told skysports.com.

“West Ham was on a relegation spot and I knew we’d have a big problem if we didn’t get all the players to take on their defensive duties,” the coach continues, which is why he decided to put Arnautovic not on the wing as usual but in the storm centre.

“We had to find a position for him where he didn’t have to double all the time and help out the other player behind him defensively. We tried a little bit and putting him up as a centre forward was the best solution,” Moyes knows and immediately follows up: “It was a logical step, not nuclear physics.

Success proves Moyes right. Arnautovic has literally exploded since playing as a centre forward and has played a big part in West Ham being less than six points off the relegation line in one game.

Not only because of the same position, but also because of his leadership qualities, Moyes Arnautovic even compares with Ibrahimovic:

“He has something of Zlatan. He has a similar way, his teammates also see him like that. He is already a leader, but must internalize and develop this role even more.”

According to Moyes, the way Arnie gives herself on the pitch from time to time still has to change.

“Sometimes he moves as if he doesn’t care about anything. But he is now at an age where he can and must influence young players. This works through leadership and performance. He’s already doing the job.”