Premier League: Tottenham at Wembley Stadium: A place of longing as a curse 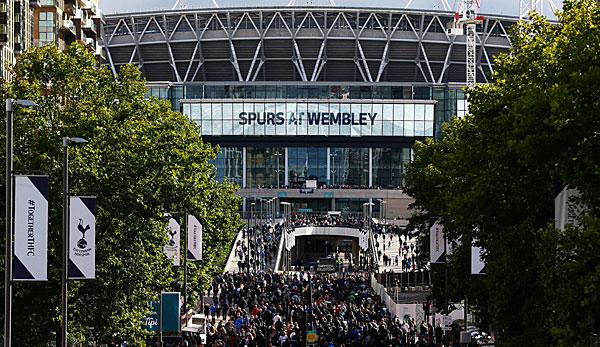 The Tottenham Hotspur were once regarded as the Cup specialist and even engaged an Argentinean who dreamed of nothing more than a performance at the Wembleystadion.But since this is the temporary home of the club, a curse has been cast on it.The fans can’t provide the usual atmosphere and the players have problems with the bigger field than at White Hart Lane.After three home games of the Premier League, the Spurs will try again on Saturday at 4 p. m. against the AFC Bournemouth in the LIVETICKER.

There’s a song called “Ossie’s Dream” about the FA Cup Final 1981.Ossie is called Osvaldo Ardiles and was an Argentinean footballer.Together with his compatriot Ricardo Villa, Ardiles joined the Spurs in 1978 as a newly crowned world champion.He brought southern football flair to London and soon developed a big wish: Ardiles wanted to play in the Wembley Stadium.

In 1981 this dream finally came true and the band Chas & Dave wrote their song about “Ossie’s Dream”before the final against Manchester City.Up to fifth place in the British charts at that time it stormed and to this day it is the vocal remembrance of this finale among Spurs fans.One verse says:

In our ranks there’s Ossie Ardiles,

He’s had a dream for a year or two,

That one day he’s gonna play at Wembley,

Now his dream is coming true.

For the fans of the Spurs, on the other hand, it was always a place of nostalgia, as their club had long been regarded as the Cup specialist.Only two championship titles in the club’s history are opposed to a total of 15 victories in major cup competitions (eight FA Cups, four League Cups, two UEFA Cups and one European Cup Winners’ Cup).With the demolition of the old Wembley Stadium and the construction of the new one, not only two towers turned into an arch, but for the Spurs from an old place of longing into a desolate homeland.

Because the White Hart Lane is being demolished and rebuilt until summer 2018, Tottenham will have to play his Premier League home games in the Wembley Stadium this season.The Spurs have not yet won any of the three so far, while they scored four victories in four games with a goal difference of 12:2.When they played at White Hart Lane last season, they were still the best home team in the league.Tottenham won 17 out of 19 games and the other two ended in a draw.

Only in the Champions League, things didn’t work out at home – because the Spurs had to make their way into the Wembley Stadium due to UEFA regulations (the White Hart Lane has already been built).After home defeats against Monaco and Leverkusen, they failed in the group stage.It’s going to be a lot harder for Tottenham than you can imagine,”said Arsene Wenger, coach of local rivals Arsenal.And he knows what he’s talking about.

In the 1998/99 and 1999/2000 seasons, Arsenal played his Champions League home games in the Wembley Stadium to maximize earnings and failed early in the game.”It was a nightmare for us, we didn’t get along at all,”Wenger recalled and said:”The course was bigger than the tight one in the Highbury and it was very unusual for our players.In Wembley Stadium, our opponents just ran away.”

The Spurs now suffer from the same problem.Whilst White Hart Lane, with an area of 100×67 metres, had the second smallest square in the league, the largest in the Wembley Stadium is 105×69 metres.The difference in area is 545 square metres, almost the size of a penalty area.This is a blatant obstacle for the intensive running game, the high pressing and the early start of the spurs.Opponents have more space to escape the encirclement.If Tottenham still succeeds in winning the ball early, the distance to the opponent’s goal is longer.

The Spurs managers had an early idea that this difference in area could cause problems.According to the English Times, Tottenham even applied to the league before the season to see if the Wembley Stadium’s space could be reduced.In vain, a majority of the other club leaders voted against.Coach Pochettino then took the initiative and had a training ground on the club grounds enlarged to the size of the Wembley field.Nothing has been achieved so far.

Players and coaches are trying to avoid the issue in their public statements, saying:”We would have lost on White Hart Lane, Wembley Stadium or in a park,”defensive player Eric Dier said after a 2-1 home defeat at Chelsea.After the following draw against FC Burnley, Pochettino said:”It has nothing to do with the Wembley Stadium and whoever thinks so should stop.

The next home game really gave Tottenham cause for hope, defeating Borussia Dortmund 3-1 in the Champions League,”This victory means more than three points and I hope he will end the talk of a curse,”Pochettino said afterwards.Tottenham, however, benefited considerably from the carelessly high level of Dortmund’s defence in this victory.And three days later he played Swansea City 0-0 in the Wembley Stadium.

Only around 65,000 spectators followed the match in the stadium, which actually had a capacity of 90,000 and was therefore only less than three quarters full.In the next match in the League Cup against FC Barnsley, there were just under 24,000, never less than in a professional match at Wembley Stadium – despite the fact that Tottenham offered tickets for ten pounds.

In a country where, due to overflowing commercialisation and the lack of standing space, only a few first league stadiums offer thrilling atmosphere, White Hart Lane has always been an exception until its demolition:”People were sitting there on your back and the noise stayed under your roof,” ex-player Gareth Bale enthused recently.”It’s difficult to be in Wembley Stadium.

The fans of the Spurs also created special atmospheres in the huge Wembley Stadium – but not so much in everyday life as in special games.Then, for instance, when Ardiles fulfilled his dream.The song is still sung in all the pubs around White Hart Lane, in the Bricklayers Arms or in the Bill Nicholson Pub.This season they are about 20 kilometres away from the home venue, and only a few metres away from the next venue.Then, when Tottenham returns to Tottenham and the Wembley Stadium becomes a place of longing again.Then, when everything is as it should be.