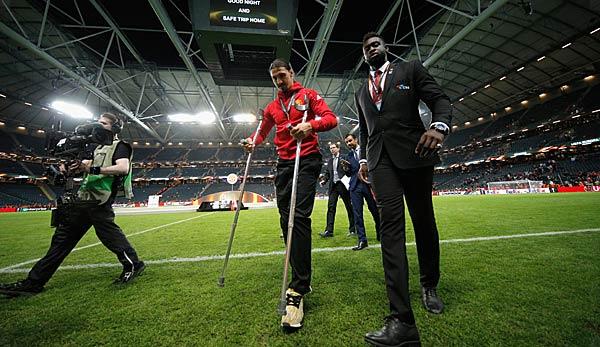 Zlatan Ibrahimovic from Manchester United suffered a cruciate ligament rupture at the age of 35. What would have meant the end of a career for many, only spurs the striker on.

“Abandonment is not an option,”says Ibrahimovic in the Interivew with Volvo. The Swede is about to make his comeback for the Red Devils:”I am focused on returning better and stronger. That’s my target, and it will happen. There’s no other way.”

But the striker was not always prepared with such determination:”Thoughts have turned in my head. What’s going on here? I am 35 years old, what can I do? What does the future hold? Instead of concentrating on one thing as usual, there were a lot of thoughts.”

Ibrahimovic, who at times felt “paralyzed”, had to gather:”I have come this far and will stop on my terms, not on someone else’s.” I have to say that I am not going to be able to do so. I have new scars. These are memories for life. I’ll never forget what happened.”

After his serious injury, Ibrahimovic has been pausing for about seven months:”I remember using crutches. I was in bed for twelve hours a day. I had always trained a lot before. Hard work always gives you back something, that’s my philosophy.”

The Swede says:”I had Sweden for breakfast. Lunch in Europe. I took over the world for dinner. The plans haven’t gotten any smaller:”Many people don’t understand the level I’m at.”

Ibrahimovic has quite different goals:”I compared myself to Adriano, Hernan Crespo, Lionel Messi or Ronaldinho. You don’t ask for respect, you ask for respect.”