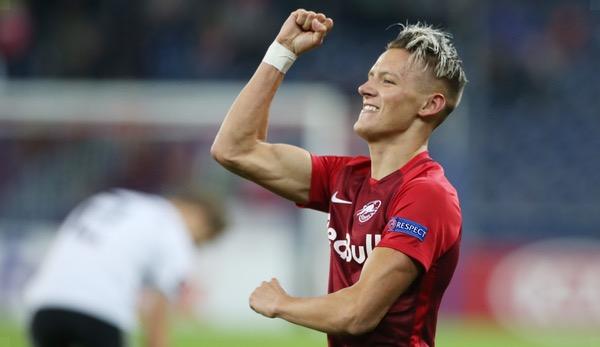 Hannes Wolf played himself into the spotlight with FC Red Bull Salzburg. The attacking midfielder’s strong performances in recent weeks and months have apparently sparked the interest of Premier League clubs. According to a report, even Arsenal and Tottenham are interested in Wolf’s commitment.

As the British Mirror reports, a quartet is now likely to observe the 19-year-old more closely. While Everton has been showing interest in wolves for some time now, Tottenham, Arsenal and Southhampton may have joined in.

In the current season, Wolf has already played 21 matches for Salzburg, scoring four goals and preparing a new goal. Wolf went through the Red Bull Academy and crowned himself Youth League Champion in the 2016/17 season under coach Marco Rose.

Austria’s team boss Franco Foda also noticed the rapid rise of the offensive talent and rewarded him at the end of last year with a call for the senior national team. In both U21 play-off games against Greece, he was on the pitch over the full distance and played a decisive role in the first-time European Championship qualification of an Austrian selection.

Wolf still has a contract with the Salzburg team until summer 2020. While sports director Christoph Freund would like the team to remain largely unchanged in the coming winter transfer window, the coming summer would be the last time to earn a decent transfer fee for Wolf.