Champions League: Buffon does not regret refereeing: “Would it say so again” 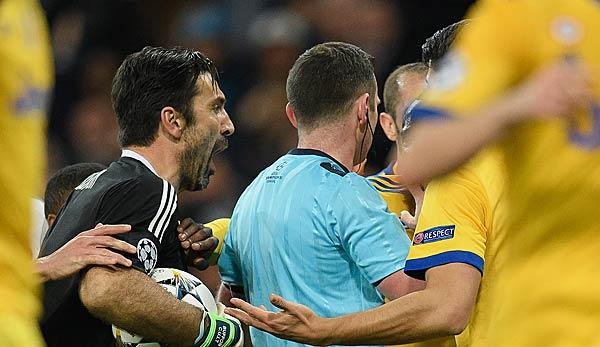 Juventus goalkeeper Gianluigi Buffon has declared that he would always shout out to referee Michael Oliver the same words he said after the controversial penalty whistle in the Champions League quarter-final injury time against Real Madrid.

“They were logically chosen words. I would say it again, perhaps with a more civilized language choice,” Buffon said on the Italian TV show Le Lene. The impartial one was “a boy who found himself in a situation that was too complicated for him. Too confused, just too big.”

After a push from Juve defender Medhi Benatia against Real attacker Lucas Vazquez, Oliver had pointed the point and thus prevented the already safe extension. Buffon scolded the referee and saw the red card.

“You have to admit to me the right to defend my team mates and the five thousand fans who travelled with me,” continued the 40-year-old Italian. “It was necessary, even if it damaged my image.”

For Buffon, the inglorious departure from Madrid could have been his final departure from the Champions League stage. His contract with Juve expires at the end of the season and he is expected to end his career in the summer.