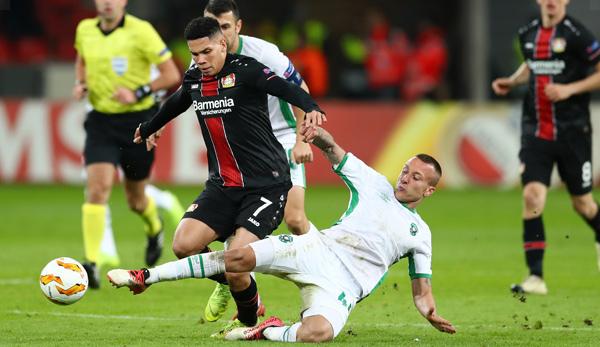 Bayer Leverkusen have lost their first chance to win the Europa League with their second suit. Coach Heiko Herrlich’s team, who had already qualified early for the next round, only managed to beat Ludogorez Rasgrad 1-0 on the penultimate matchday against Ludogorez Rasgrad.

The Werkself, however, still has the chance to take first place in their own hand, as FC Zurich lost 1:2 against AEK Larnaka.

For the Werkself, Mitchell Weiser compensated for Marcelinho’s (69th) lead in the 85th minute. Leverkusen will play for AEK Larnaka in Cyprus on 13 December and would be the first to win. Group winners in the intermediate round avoid big names, including teams relegated from the Champions League to the Europa League.

Bayer coach Heiko Herrlich had changed his starting eleven to ten positions compared to the 2:0 against VfB Stuttgart last Friday. Only the Chilean Charles Aranguiz, who first wore the captain’s armband against the Bulgarian leaders, was there against the Swabians from the beginning. The Greek Panos Retsos celebrates his season debut after a long injury break for Bayer, but had to be replaced by Julian Baumgartlinger in the 34th minute. Youngster Sam Schreck also made his debut for the Werkself.

Supertalent Paulinho, the Leverkusen-based company’s most expensive summer purchase with 18.5 million euros, was also allowed to go on and, in contrast to many others, could definitely recommend himself for further assignments. The regular goalkeeper Lukas Hradecky, the budgeted defensive boss Sven Bender and national player Julian Brandt were not even in the squad.

In front of only 15,000 spectators, the hosts, who had been unstable in the championship so far, left no doubt about their role as favourites at the beginning. After just two minutes Lucas Alario narrowly missed the finish line. Shortly thereafter, the Swede Isaac Kiese Thelin, who had scored 3-2 in the first leg with the Bulgarian champions, also missed a good opportunity to take the lead.

Then the game flattened out. Bayer continued their efforts and had significantly more shares than the visitors, but in the last period they lacked precision and penetrating power. It was clear to the team that they had never played together in this formation before.

The Bulgarians, who were also spared some of the regular players, were unable to benefit from the many shortcomings in the Bayer game and barely made it across the midline.

After the side change, Bayer shifted up a gear. Schreck and Leon Bailey gave good chances shortly after the restart, in the 56th minute Wendell found his champion in his Brazilian compatriot Renan in the guest goal.

Even with captain Lars Bender, who had substituted in the 63rd minute, Bayer did not manage to crack the Bulgarian defensive bulwark. After Marcelinho had failed at first because of Ramazan Öczan, he did it better seconds later. Shortly before the end, Weiser hit the ball with a nice shot.