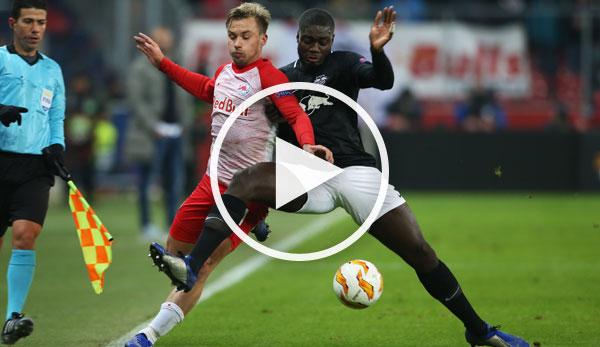 On Thursday, Red Bull Salzburg and RB Leipzig had a “can duel” in group B of the Europa League. The Austrians defeated Leipzig 1:0 and showed an impressive performance. In this article you can see all goals and highlights of the game in the video summary.

The highlights of selected UEFA Europa League matches will be available free of charge on SPOX from 0.01 a.m. on the following day. In this context, SPOX will offer the highlights of the Austrian teams after each matchday on Friday.

The situation with the live broadcast has also changed for the 2018/19 season: All matches of the Europa League in Germany and Austria are shown on DAZN. In Germany, football fans can watch 15 Europa League matches on RTL and RTL Nitro. In Austria, however, SPOX/AT broadcasts selected highlight games. In addition, PULS 4 has the rights to broadcast live individual matches.

In Germany as well as in Austria DAZN has highlights for all games in its program. DAZN, which also shows Champions League matches live in addition to the Europa League, costs only 9.99 euros per month and can be cancelled at any time. Here you can convince yourself of the DAZN offer for 30 days free of charge.