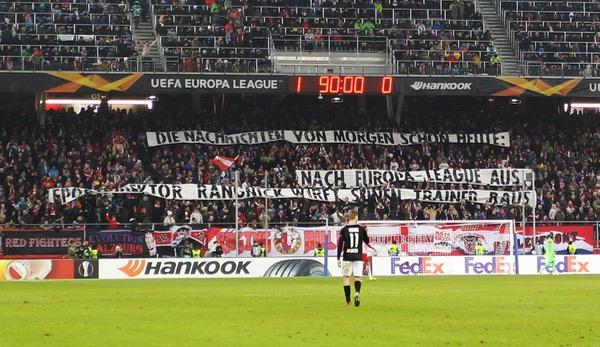 The fans of FC Red Bull Salzburg caused a sensation during the European League match against RB Leipzig with some banners. With their statements, the supporters of the group winner from Pool B mocked Leipzig coach and sports director Ralf Rangnick. He countered right after the game.

First the fan grandstand of the hosts showed five banners with statements. On the first stand you can read: “RR, you have brought a lot for our club – and made a part of the success yours”.

About ten minutes later the curve praised Rangnick’s successor in Salzburg, Christoph Freund: “Our friend has perfected the system so that our club works at top level”.

“RR, nevertheless you lied to our faces, the last respect has evaporated”, the fans addressed the transfer policy within the Red Bull Empire.

In minute 80 you could read: “RR, transfer announcement before the game, is that really better than our style?” In the last few weeks, the signs that Amadou Haidara is to switch from Salzburg to Leipzig already in the winter transfer window have become clearer.

Last but not least, the Salzburg fan stand announced a headline: “Tomorrow’s news today: After Europa League Aus: Sports Director Rangnick throws out his coach”, and alluded to the double role of Rangnick in the Leipzig team.

After the match, Rangnick said that the Austrian Bundesliga was a clear advantage for Salzburg in his defeat against Salzburg. “We had a difficult Bundesliga game in Wolfsburg, at the same time Salzburg wins at the table fifth Hartberg before the match day with 4:0 and could also have won 8:0. That’s another difference,” he said.

And continues: “Take a look at the Austrian table right now, where the big clubs like Austria, Rapid and Sturm Graz stand. That says it all. I don’t want to diminish Salzburg’s performance with this, but they still can’t lose on the weekend, no matter which line-up, no matter if somebody gets 20 percent less or more”.

Asked about his former role in Salzburg, Rangnick expressed his satisfaction with what he had achieved: “When I started here with Christoph Freund and Jochen Sauer in 2012 at the latest, a completely new kind of transfer strategy and way of playing began. That’s what you saw in this game, too.”