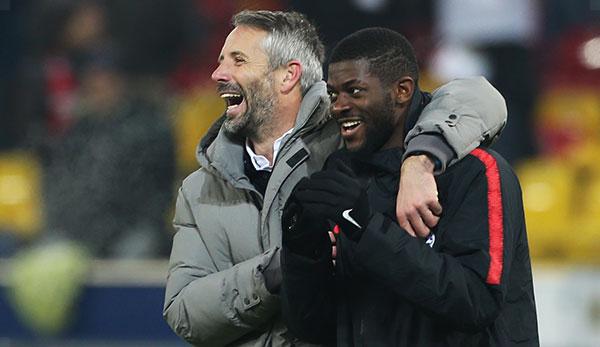 On Thursday evening Red Bull Salzburg prematurely managed the promotion and victory in Group B of the Europa League. The team of coach Marco Rose celebrated a 1:0 home victory over their sister club RB Leipzig and won their fifth match in this pool. The voices to the game.

Marco Rose (Salzburg trainer): “The boys have earned it. It is important to enjoy such moments, which we have worked hard for and thus achieved an intermediate goal. Once again, I am very proud of the boys. The victory was well deserved. The first 25 minutes were great from my team. Then Leipzig came into the game better, without us having allowed big chances. It’s a cool thing that we’re still in the Europa League.”

Hannes Wolf (Salzburg player): “The whole game was a goose bump feeling, the stadium went along with every good action. We are overjoyed at the three points. We got off to a great start, that gave us a good feeling. Over 90 minutes we were the better team and are the deserved winner. We’re in the knockout round, that was our goal. I hope the team stays together like this – then we’ll see how far things go in spring. There’s another big game waiting for us against Celtic, and we’re going to score three points there too.”

Zlatko Junuzovic (Salzburg player): “We bring an incredible intensity to the court. This team is characterized by willingness to run and intensity.”

Ralf Rangnick (Leipzig coach): “I think we had a hard time in the first 20 minutes. But that didn’t surprise me so much, because we haven’t played with this formation before. From the 20th minute it got better, then it was a game at eye level. Salzburg played well. We knew it was a top European team. I think we made a good game considering the personnel situation. To win, we would have had to make a very good game.”

Stefan Ilsanker (Leipzig player): “Salzburg was clearly superior in the first 25 minutes, we had hardly any solutions against the pressing. Then we got into the game better and better, gained some advantages and then it was a duel at eye level, maybe we were a bit better in terms of playing. We’ve never played with this line-up before and we probably won’t play with it again.”

Timo Werner (Leipzig player): “We completely missed the first 20 minutes. In the second half, it was a competitive game until 1-0. Then we took a stupid goal. Everyone knew the constellation. A victory would have been important.”