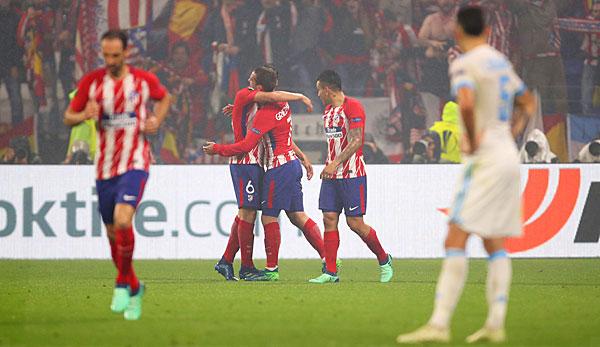 Atletico Madrid are 2018 European League winners, beating suspended coach Diego Simeone Olympique Marseille 3-0 (1-0) in the final in Lyon, winning the Europa League for the third time after 2010 and 2012.

Marseille got off to a better start and surprised Atletico with an offensive style of play. Via the active Payet, OM had two top-class chances in the first minutes, which Germain and Rami frivolously missed.

Atletico had a hard time with the aggressive French start and after 17 minutes they had a remarkably low pass rate of 41 per cent and no shot at the goal. At a time when OM had complete control of the game, Zambo Anguissa made an individual mistake that Griezmann used to take the lead with the first Atletico goal kick.

A few minutes later OM had to take another low blow when the previously strong Payet had to be replaced due to injury.

As a result, Marseille seemed shocked and never really came back into play. At the latest the second Griezmann goal immediately after the break decided the final in favour of the Rojiblancos. Atletico were better at passing and managed the two-goal lead with confidence. OM couldn’t think of anything but a tough duel. Mitroglou hit the inside post (81st) out of nowhere and started a final offensive. But this came too late, Atletico countered and increased by Gabi even to 3:0.

Used an individual mistake in the OM defensive ice-cold to 1-0 lead. Introduced the second gate himself and finished it in world-class style with a chip. Gabi also played an outstanding pass to Diego Costa before the third goal. Also beyond that very present, always playable and with dangerous standards.

Played most passes, had the second most ball actions and had a strong duel rate with the French. Everything lapses, because his stick mistake resulted in the 0:1. A shock from which OM did not recover and thus the decisive scene.

Very strong performance. Especially in the wild first pass often required. In the meanwhile confusing game, however, always kept the overview, made no mistakes and dealt yellow cards in the right moments. That’s how he got a grip on the game. Even when OM played rougher again during the second half, he remained in control of the situation.