Europa League: “Can give us a postponement” – Rapid captain hopes crisis will end 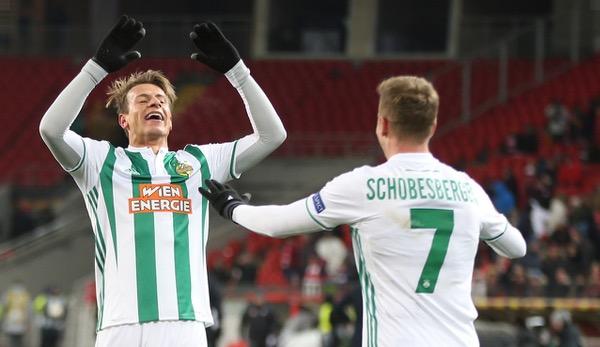 SK Rapid has returned from Moscow with a surprising victory. Thanks to the 2:1 win at Spartak, a Rapid team with a very weak substitution maintained the chances of spring appearances in the Europa League. Coach Dietmar Kühbauer’s team faces an absolute final against the Glasgow Rangers in less than two weeks. One draw would be enough.

“We have a home game, a final game, we will do everything in our power to make sure that we spend the winter,” promised a cow farmer who worked in a relaxed manner. He was happy about a picture he had not been used to before: “It’s a wonderful situation when you can look at the table from the other side”. Rapid describes them as group runners-up before the last matchday.

After a 0-0 draw in the parallel match between Villarreal and the Rangers, Rapid will be able to make it into the sixteenth-finals with a home draw in Group G on 13 December.

“This puts us in a wonderful situation, we’re all about the Ascension. We played a great game against the Rangers”, remarked Stefan Schwab. In view of the sporting crisis of recent weeks, the captain said it was nice to hear “some positive things once again. That can give us another postponement for the next games.”

In the bitterly cold Spartak Stadium, the Viennese converted a 1-0 deficit into their first away win in the European Cup since 18 August 2016 (4-0 in Trencin) or seven games. Mert Müldür (80th) and Philipp Schobesberger (91st). “We may have been a little too passive in the first half. But with every minute our self-confidence and faith in ourselves has increased,” Schwab said.

“It is very important that faith returns properly, with each individual. And that we as a team have the confidence to shoot a game.”

Rapid went into the game without five regulars, Kühbauer left the recently fit Schobesberger and frequent player Schwab on the bench at the beginning. His dodge worked. With their receipts after a good hour, a jolt went through the team. Schobesberger shone against a first unfocused and then tired Spartak defensive with a template and the winning goal, with which Schwab assisted.

“Of course, it’s never wrong to have two players behind you who are upgrading,” Kühbauer said. “You could say the coaching staff did the right thing.” The Burgenländer was also pleased that some recently criticised players, such as Mateo Barac, had seized their chance. “It was the nicest thing for me that even players you might not believe in have done well.”

This is what Wacker Innsbruck will be looking for in their away game on Sunday. “Of course, this will be a completely different game,” Schwab said. “Against Spartak, outside expectations were zero.” In the league the Hütteldorfer are under massive pressure as table eight.

Schwab promised a conscientious regeneration of the whole team before the return flight: “We know what’s at stake for us there.” Against Innsbruck two wing players, Andrei Ivan and Thomas Murg, could return.