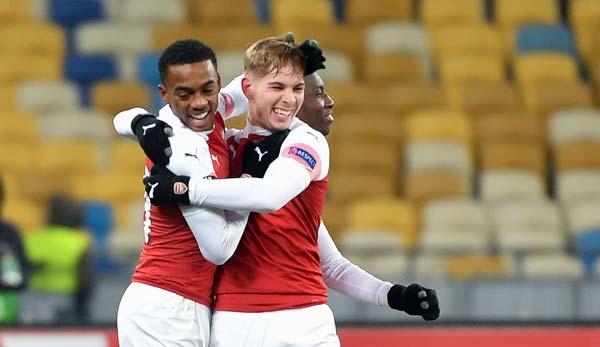 FC Arsenal can still not be defeated without playmaker Mesut Özil. The top English football club won the Europa League 3:0 (3:0) at Worskla Poltawa and remained unbeaten for the 18th time in a row. Football dwarf F91 Düdelingen from Luxembourg, on the other hand, missed a big sensation at AC Milan.

Emile Smith Rowe (11th), Aaron Ramsey (27th / penalty kick) and Joseph Willock (41st) scored the goals for the Gunners, who had started with a B eleven. In addition to Özil, goalkeepers Bernd Leno and Shkodran Mustafi were not in the squad of the Londoners in Ukraine, who had already qualified for the sixteenth-finals before the match. The meeting against Poltava was held at the Olympic Stadium in Kiev because of security concerns over the imposition of martial law in some regions of Ukraine.

Football dwarf F91 Düdelingen from Luxembourg missed a big sensation at AC Milan. German coach Dino Toppmöller’s team lost to Italy 2:5 (0:1) after a 2:1 lead in the meantime. The former Sandhausen professional Dominik Stolz (39th) and Dominik Turpel (49th) had shot the match in San Siro for the outsider and raised hopes for the miracle.

But own goals from Stelvio (66th) and Tom Schnell (78th) as well as goals from the former Bundesliga pro Hakan Calhanoglu (70th) and Fabio Borini (81st) made the Rossoneri cheer and set the course for the intermediate round.

In Leipzig’s Group B, Celtic Glasgow celebrated an away victory in the Europa League for the first time in club history. The Scots won 1:0 (1:0) after 16 games without success at Rosenborg Trondheim. FC Zurich, Bayer Leverkusen’s first pursuer in Group A, were beaten by AEK Larnaca 1:2 (0:1).