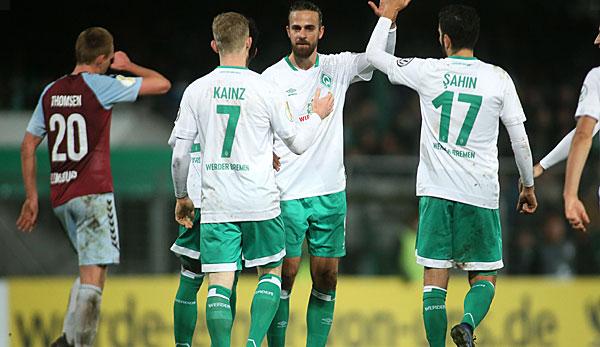 Second round? No problem. In contrast to other top teams (now in the LIVETICKER) Werder Bremen has entered the round of sixteen of the DFB-Cup quite sovereign. The six-time cup winner gave the bravely fighting fourth league team SC Weiche Flensburg no chance and won 5:1 (3:1) without any effort.

Here’s the roundup to the games on Wednesday.

Claudio Pizarro (8th), Florian Kainz (37th), Davy Klaassen (44th/Foulelfmeter) and the substitute Martin Harnik (76th/80th) scored for clearly superior, but by no means shining Bremer. For Werder trainer Florian Kohfeldt, the never-ending progress was the perfect gift for the one-year anniversary on the bank of green and white.

The Flensburg amateurs were only allowed to dream briefly of a continuation of their cup adventure after the interim compensation by Ilidio Santos (27th), who works as a waitress. The eleven of coach Daniel Jurgeleit obviously had too much respect for the fourth Bundesliga team and for a long time acted far too defensively against the back, not always with a firm saddle from Bremen.