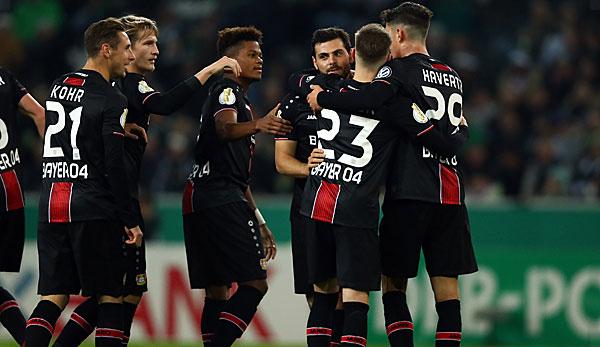 Trick instead of treat: Heiko Herrlich can breathe a sigh of relief after a furious Pokalcoup on Halloween. The coach last counted, Bayer Leverkusen, won the Westschlager with a in the second half indisputable Mönchengladbacher Borussia deservedly with 5:0 (2:0) and collected further plus points. While the ice-cold Werkself has reached the round of sixteen for the seventh time in eight years, Gladbach’s home curse has continued.

Julian Brandt (5.), Tin Jedvaj (45.+1), Karim Bellarabi (67./74.) and Kevin Volland (80.) scored in a cheerful game for the Herrlich-Elf, which again convinced three days after the 6:2-Gala in Bremen. Bayer repeatedly used needlesticks, especially for counterattacks. For the harmless Gladbachers, however, the dream of winning the cup ended like it did a year ago against their Rhine rivals. It was their sixth home defeat in their ninth cup match at Borussia Park.

“Today only five goals and not six – I am disappointed by the boys,” said Bayer keeper Lukas Hradecky with a twinkle in his eye and stated: “From the very beginning we radiated joy in playing. That was a great performance. When the nervousness is gone, we’re just strong. That’s been shown.”

Herrlich saw his perseverance confirmed during the past weeks. “Lightness and self-confidence only come back through results,” said Leverkusen’s coach on the Sky microphone, looking straight ahead: “We must not stop now and must stay on the ground. Hunger must remain constant.”

Right from the start of the encounter, it was a tough one: after Volland had done the groundwork, Brandt brought the guests into the lead with their first chance. The 22-time international hit the long corner flat from an acute angle and gave Borussia a cold shower.

Gladbach’s coach Dieter Hecking had warned that his team “should not run into the open knife” in view of the stronger Bayer offensive. That requirement was quickly gone. With the same starting eleven as in Bremen, Leverkusen played self-confidently, was fire-threatening in counterattacks and this time also stood defensively safe.

Gladbach had more of the game until the break, but without the injured goalscorer Alassane Plea was much too harmless in the offensive. In front of 48,755 spectators, the danger came more from the lightning-fast guests. In the 24th minute Volland Gladbach’s Nico Elvedi was fooling around but only hit the post.

Borussia, with seven home wins in a row in the league at the end of the season, were vehemently pushing for a second place in the second half. But the picture remained the same: Bayer’s chain of three with Sven Bender in the centre was safe and could rely on the strong Hradecky in case of doubt.

Bellarabi made everything clear with a double-pack and now stands with six goals from the last four compulsory games. After a strong pass by substitute Dominik Kohr, Volland was finally rewarded for his strong performance.