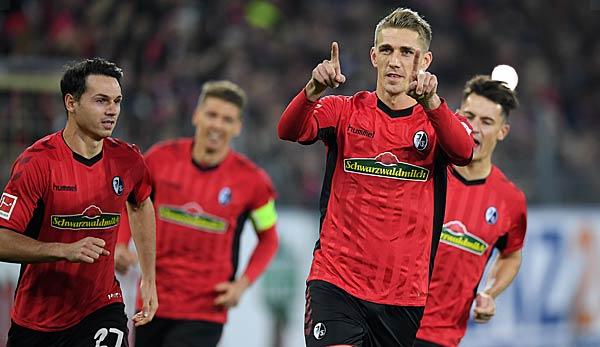 In the second round of the DFB Cup, Holstein Kiel welcomes SC Freiburg today, Wednesday. All necessary information about the game and the transmission on TV, livestream and live ticker you get from SPOX.

The Freiburg team currently occupy eleventh place in the Bundesliga table, beating Borussia Mönchengladbach 3-1 in their final duel at home. The team has now been unbeaten for three match days.

The duel between Holstein Kiel and SC Freiburg will start today, Wednesday evening, at 8.45 pm. The venue is the Holstein Stadium in Kiel, which offers space for 10,200 spectators.

Sören Storks will act as game leader, his assistants will be Jan Neitzel-Petersen, Jan Seidel and Christof Günsch.

The party of Holstein Kiel against SC Freiburg will not be shown on free TV. Instead, you will need a Sky subscription to watch the game live. If you are a subscriber, you can use the livestream of SkyGo.

Christian Streich is well aware that the Kielers should not be underestimated. In the second division, they scored seven points from the last four matches. After the victory against St. Pauli they want to strike now also in the cup.

Moreover, according to the Freiburg coach, anything is possible in the cup anyway: “It doesn’t matter whether it’s a first, second, third or fourth league team – the cup is a cup”.

However, Streich has to do without his right-back Lukas Kübler. Muscular problems are the reason for this. “Kübi won’t play for sure,” he said.

The 53-year-old still left open the question of whether there would otherwise be further failures to complain: “We still have to look at one or the other.

For all of you who don’t have a subscription and still want to stay up to date during the game, SPOX offers a live ticker as always. On the SPOX website you can also find live tickers for the Bundesliga, 2. league and 3. league.