DFB Cup: By brothers and teachers: What makes BVB vs. Union so special 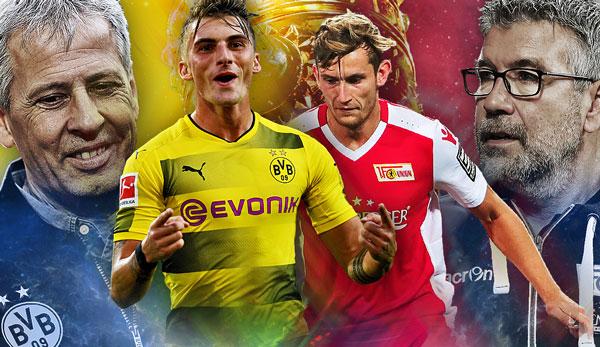 On Wednesday evening (18.30 in the LIVETICKER) Borussia Dortmund and 1. FC Union Berlin, the only two undefeated teams of the German professional leagues, will face each other. BVB coach Lucien Favre meets FCU coach Urs Fischer, an old companion – and Maximilian Philipp may have to face his best buddy Christopher Lenz.

It hardly happens anywhere that two clubs in the same city play professional football and the fan camps don’t want to get at each other’s throats. All the more astonishing that this is not the case in Berlin. Hertha BSC and Union have no greater rivalry.

One who comes from Berlin, is very close to home and would probably like to wish Hertha to hell is Maximilian Philipp from BVB. At the age of 14 he was sorted out by the old lady because his coach – curiously enough a former rower – found him too slim and small to one day be able to become a professional.

Philipp’s ex-coach was well off the mark with 29 goals in 109 professional matches in leagues 1 and 2. What the coach would have been right about, Philipp could be described as shy. This characteristic applies today as it did yesterday to the BVB offensive player.

And because Philip was so reserved and no longer wanted by Hertha, Christopher Lenz helped him. He is currently employed by Union Berlin as a left-back and could be Philipp’s direct opponent in Dortmund on Wednesday evening. Both are united by a special friendship that rarely exists in the professional business.

Philipp and Lenz grew up in the same street in Berlin, went to kindergarten together, then to primary school together and then to the Poelchau secondary school in the Olympic Park, not far from the Olympic Stadium. When Hertha said no to Philip, the two did not go their separate ways.

Instead, Lenz simply went along voluntarily so as not to leave his buddy alone. “The friendship with him was simply more important to me at that time than the dream of the football professional. Family and friends are always the most important things for me. And since he’s more than just a friend to me, I said I’d go along with it. He is more like a brother I never had,” Lenz looks back on this extraordinary process.

“I call him my brother,” Philipp says. Both then kicked Borussia for Tennis, so to speak around the corner with Hertha. “That was a huge relief for me. I’ve always been this shy boy who says little. I don’t walk up to new people that fast alone. I was afraid to join a new team because I didn’t know any of them. He knew: “When I join a new team, it won’t be easy for me,” says Philipp.

He stayed with TeBe for three years, it wasn’t until 2011 that he split up. Lenz, on the other hand, had already switched back to Hertha after one season – and asked Philipp for permission: “I asked Maximilian if that would be okay. He said it wasn’t a problem, so I went back to Hertha.”

Philipp found his way into professional football via Energie Cottbus and SC Freiburg. Especially the “Ruheoase” in Breisgau under Christian Streich helped him enormously. Lenz, on the other hand, took the detour via Borussia Mönchengladbach’s second team and four years later returned to his home town of Union.

After seven years the two buddies play against each other again. The fact that Lenz again wins 5:0, as then with Hertha in the U19 Cup duel against Philipps Cottbuser, will probably not happen this time. “The anticipation is huge,” rejoices Lenz, who was visited by Philipp at the guest performance in Paderborn on the penultimate weekend. Real buddies just like that.

Page 3: BVB against the Union – the unbeaten