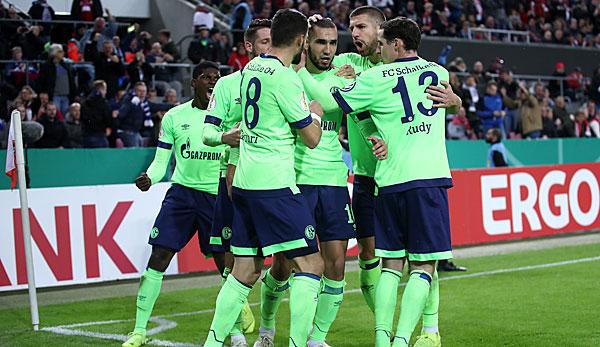 Despite a weak performance, FC Schalke 04 avoided the second round of the DFB Cup and defeated 1. FC Cologne 7:6 (1:0, 0:0, 0:0) after penalty shootouts. The Schalkers benefited from a dubious penalty shot shortly before the end, which brought the squires into extra time and penalties.

Domenico Tedesco changed his starting eleven to six positions compared to the goalless draw in Leipzig, but left it at a 3-5-2: Naldo, Schöpf, Rudy, Harit, Konoplyanka and Burgstaller rotated into the starting eleven. At the beginning of the 4-1-4-1, Markus surprisingly gave up Cordoba instead of his 17-goal man Terodde on the Cologne side.

At the beginning of the game, the royal blues did not converge much: Cologne had in the first 20 minutes more of the game (60 percent ball possession) and also the clearer actions in the last third by Cordoba (8) and Schaub (11./20.). Schalke came into the match a little better in the middle of the first run, had a better grip in the duels and recorded the first serious finishes with Harit (25th) and Naldo (28th).

The role of Uth was conspicuous in the once again frighteningly harmless Schalker game. The national player let himself fall deeply and acted as a kind of ball tug, without however providing lasting creative elements. Shortly before the break, Cordoba brought the Rhinelanders happily, but by no means undeservedly, into the lead: Sane missed a liberation shot, Cordoba’s shot from 16 metres was deflected untenably (43.).

Schalke also lacked offensive solutions in the second round, Cologne continued to present itself well organized and became even better in the duels. Horn foiled the best chance of the squires when he parried a violent shot from Naldo from 17 meters (68th).

Tedesco reacted and brought Caligiuri, Embolo and Bentaleb and changed 20 minutes before the end to a chain of four. Bentaleb in particular provided new momentum and Cologne came under strong pressure in the last ten minutes. Schalke came lucky but not undeserved through a discussionable penalty kick to the equalizer (88th) and forced the extension. There the second division team was again the better team, missed it however to force a decision off the penalty shootout.

Drexler shoots over the gate

Had the most ball actions of all Schalkers (70), led the most duels (19) and won 63 percent of them. Operation high running effort and was one of the few, albeit luckless rays of hope in the Schalker offensive with three finishes on goal. Nerve-strong then in the penalty shootout.

He lost most of the ball in the Schalker game (16) and did not look good against Schaub again and again. In addition, without any accents in the offensive (no goal-shooting participation) and with a weak duel rate (33 percent). Had to go down with a ankle injury just before the end.

At the beginning he had a generous line, which did not harm the game. I managed without a warning in the first round and was actually right throughout in the duel evaluation. Correctly did not decide on penalty kicks for the squires when Konoplyanka went down after a duel against Schaub in the sixteenth (33.). In the second pass he showed a good instinct and often reached into the breast pocket to pull the yellow cardboard. Thus he had always the control despite the rough becoming play. The difficult decision, which he had to make on the penalty kick for Schalke after Czichos’ handball in the final phase, also tended to be correct (88th). Should have sent Uth off the pitch yellow-red after his handball in extra time.