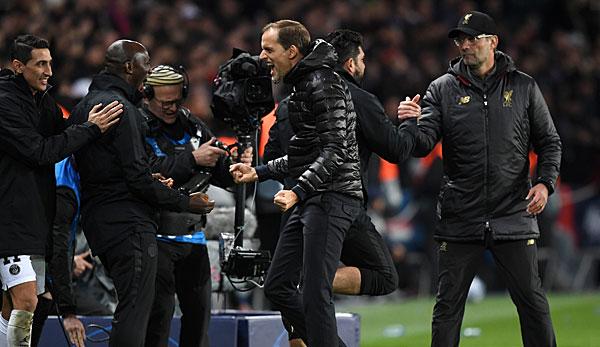 “I’m also angry when I lose big games and then talk about things just to distract from the performance of my own team,” Tuchel responded smugly to his opponent’s accusations at the post-match press conference.

Tuchel did not want to abandon Klopp’s accusations that the PSG players had influenced Szymon Marciniak from Poland by exaggerated theatricality. “I didn’t see it as such a big deal. We had to put up with a lot of fouls,” says Tuchel.

Klopp had ravaged PSG superstar Neymar after the match. “That Neymar can still stand after all the hard tackles that have poured into him is madness. Everyone knows that, and yet it is tolerated,” Klopp said sarcastically about the sometimes exaggerated acting of the offensive player, who was awarded a foul six times.

Not only Neymar found herself on the ground more and more: “It was always so emotional when someone was lying on the floor, you got the feeling that something really bad had happened, as if everyone was bleeding,” Klopp added to DAZN, and continued: “Everyone knows what they want to do, especially what Neymar wants to do – and then they get 50 free kicks.

Klopp was “annoyed” by the behaviour of the PSG players: “Something like that can really drive me crazy. In society it is often accepted as ‘clever’, so I find it very difficult. Twice in a row we won the fair play table in England and today we stand there looking like butchers. But we certainly aren’t.”

Tuchel also countered this attack cool: “You don’t have to foul if you’re behind with a goal, but they committed ten fouls in five minutes”.

The performance of referee Marciniak from Poland did not leave a good impression on Klopp and his team. The German coach criticised not only the long decision making process before the penalty for Liverpool, but also the fact that Marco Verratti did not see the red card for his foul on Joe Gomez. “That was right in front of me, so I saw him jump on it exactly. If you see all the other yellow cards, it can’t be the same suit. That’s just not possible,” says Klopp.

But all in all Klopp did not want to attribute the defeat to the referee topic. His team would also not have delivered the performance that would have been necessary to beat Paris: “Nevertheless, it doesn’t help in the race to catch up.