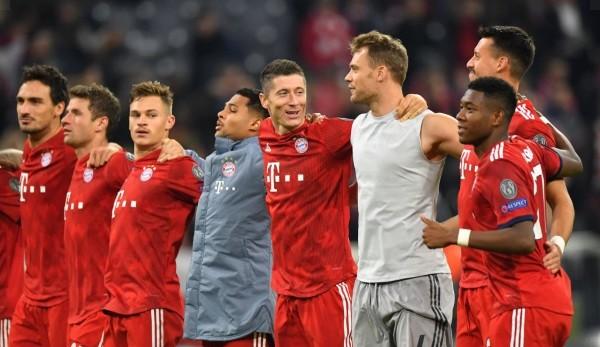 The FC Bayern Munich and its responsible persons are not known for their understatement. After the match against Athens (2:0), however, the Munich team struck unusually quiet notes.

Not so long ago, the three-man orchestra, consisting of Karl-Heinz Rummenigge, Uli Hoeneß and Hasan Salihamidzic, sat down in front of a handful of journalists in a small, tranquil room in the south of Munich and played a half-hour, brute symphony that made the whole of Germany sit up and take notice within seconds. A crescendo which for days resulted in mostly devastating criticism in the relevant media.

The tenor of the reviewers: Disproportionately loud, too fortissimo. In the meantime, people have calmed down in the Bavarian capital, where – as far as football matters are concerned – the sound is not almost always more noisy than in the rest of the republic. The notes that were played after FC Bayern’s 2-0 working victory in the Champions League group match against AEK Athens seemed very piano.

In terms of results, the German record champion is back on track after the memorable press conference of the leading trio, but since then there have been six matches, none of which have been lost (five wins, one draw).

The protagonists, whose demands lie beyond dull successes in the Greek league’s fifth place, second round struggles at fourth-class village clubs or losses of points against SC Freiburg at home, cannot be completely satisfied with the performances in the premier class, DFB Cup and Bundesliga.

Admittedly, the match with Athens at the Allianz Arena on Wednesday evening went off without any complications, with only the first 20 minutes of the game to bring a hint of danger to the visitors from southern Europe, but the penalty kick, which Robert Lewandowski had safely taken, ebbed away in its entirety.

The German serial champion nipped the uninspired attacking attempts in the bud with sovereignty and, for his part, appeared promisingly several times in front of AEK goalkeeper Vasilios Barkas, who ultimately prevented a higher defeat of his team with several good parades. Only once did the goalkeeper have to admit defeat in the second run when Lewandowski placed a Kimmich corner on the long post in the net.

Leon Goretzka summed up the whole thing quite aptly after the game. “We found the game difficult, the first 20 minutes were a bit wild,” said the midfielder in the mixed zone and followed up: “But after that we found each other and acted more structured. In the second half, our pressing worked better.”

Captain Manuel Neuer took a self-critical view of the fact that not everything is running smoothly from a playful point of view despite the unchallenged victory: “We know that you can’t see the Super Bavarians at the moment. We didn’t burn fireworks in here, so you could see. You could see that we didn’t get anything for free, we had to work hard for it,” he continued.

Not necessarily the “normal state”, which one knows from the Bavarians of the last years. “It’s definitely a difficult time. I personally came out of an injury, then took part in the World Cup, there was already a lot of negative and at FC Bayern it was also very critical in recent weeks. You couldn’t really breathe easy, that’s why you can’t stand on the court with such ease,” Neuer continued.

And so the compulsory task against AEK quickly receded into the background, rather the focus in the aftermath was on the upcoming top match against Borussia Dortmund next Saturday (6.30 pm in the LIVETICKER). With a view to the constitution of the FCB, which will have to take on the unbeaten lead in the league, the Munich side pushed the favourite role towards the formal black-and-yellow team and practiced unusual understatement.

“We have to read the table and the table clearly states: Four points ahead and a very good goal ratio. The favourite is certainly Dortmund, because they also play at home,” said coach Niko Kovac, for example.

Sentences that some reporters interpreted as tactical measures to put Dortmund under pressure. Asked about the previous statements of his president, Mats Hummels said: “It doesn’t matter whether you’re considered an outsider or a favorite. I don’t even know what’s better. Maybe it’s tactical calculation, but I’m not in a position to make my statements tactically.”

Only Thomas Müller, who is actually regarded as a reliable speaker in the mixed zone, did not want to express himself in the catacombs of the Fröttmaninger Arena this time, but instead set the course in passing: “Full attack towards Dortmund, there’s nothing more”, the attacker called into the round before he disappeared into the night.

He probably didn’t know he was sending the briskest challenge to his archrivals. His colleagues and bosses had previously clocked in the unusual pianissimo mode. Maybe it doesn’t always have to be the brute tones.