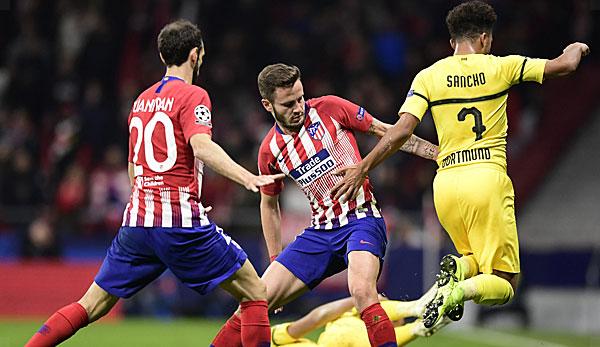 Fabian Hürzeler is one of the greatest talents in German football. This season, the 25-year-old will take a close look at selected highlight matches of the Champions League for SPOX. Today’s event will be a follow-up to the BVB’s first compulsory game failure under coach Lucien Favre at Atletico Madrid.

On Tuesday evening, both teams tactically opted for a similar concept. With the ball in their own ranks, both Atletico coach Diego Simeone and his opponent Lucien Favre set a 4-2-3-1, against the ball both teams then switch to a 4-4-2.

In the first few minutes Atletico tried to put the BVB under pressure very early and aggressively, making Favre’s plans to solve the situation more difficult. Dortmund had great problems controlling the ball during this phase. As soon as the Madrilenes came into possession of the ball, they immediately sought the vertical solution. They played out their great quality to recognize situations again and again, where they suddenly transfer from a passive defense pressing to a man-oriented attack pressing and shift the game to the side of the opponent.

Dortmund, on the other hand, tried to put the two fast outsiders Christian Pulisic and Jadon Sancho in one-on-one situations. Madrid, however, defended this very well, with Atletico’s back-back Pulisic and Sancho starting directly at the ball acceptance, preventing them from dribbling at speed.

The BVB missed it in this phase and used the resulting space behind the two defenders to their advantage. Instead, the BVB shifted their efforts more and more towards the centre, especially on the left with Sancho, in order to make room for the offensive-strong backfielder Hakimi. Although this side was much more active, it was also more predictable, since Sancho and Hakimi usually moved inwards with their right foot and were therefore easy to defend. Only in the 43rd minute Hakimi came to the end by a single action. The patience typical of Favre’s teams, to play on an opponent until a clear gap opens, brought the BVB only after the urge phase of the home side up to the 30th minute on the field.

Atletico often played with long balls. They tried to fill the space in front of the opponent’s defensive line with many players, which partly led to the BVB defenders in the last line being forced to man-on-man duels. This allowed Atletico to control the long ball for himself again and again and to continue the game in the last third.

In addition, it was not unusual for Hakimi and his Penadant to find themselves on the right, Lukasz Piszczek, Hakimi in undercounting situations, as Atletico played out of the densification after a long ball and included the far side into the game. Sancho and Pulisic neglected their defensive work and lost their direct opponents in the back. After a long shot to the front and the win of the second ball, the far side was played. Piszczek was unable to prevent the incoming visitors’ defender Filipe Luis from crossing, as he wanted to block Saul first.

Reus and Greizmann: Both players are extremely important for their teams. Reus was especially at the beginning very much on the move, challenged the ball in the half space again and again and was playable for steep gossip combinations. However, he was given very little space, so that he dropped himself again and again in order to be able to pick up speed.

Griezmann, on the other hand, had a different game, he had much more space and therefore the possibility to switch quickly again and again. It was noticeable, however, that Griezmann solved all tight situations in such a way that his teammates could pick up speed immediately or had no opponent pressure and could continue the game vertically.

At the beginning of the second half Dortmund tried to change the game with the ball a little. They tried to overlap one side and then combine. This happened either through Witsel, who dropped between central defender and outer defender, or through Reus, who went to the left side more often than before to create an over-number situation with Sancho and Hakimi and then play his way through.

Madrid had problems with this for a short time, but was able to solve it very quickly. As a result, the BVB hardly found any more solutions against the very compact quad chains from Atletico. Only after a mistake by Atleticos youngster Francisco Montero was there a dangerous goal chance.

Even after the page change, Atletico continued to rely on the pressing strategy of the first half. In BVB attacking situations, all players, even the two strikers, defended behind the ball. However, if Atletico managed to put the BVB under such pressure that no vertical solution was possible, Atletico switched to attack sprinting and produced more and more simple mistakes in the game structure. Atletico was also able to accommodate the fact that BVB keeper Roman Bürki usually opened the game flat and often brought his fellow players under pressure early on through the early counter-pressing of Atletico. The resulting playback errors in the forward movement also resulted in the scoring chances of Thomas Partey (38th) and Angel Correa (61st).

If Atletico won the ball in defensive pressing, they had a long way to the opponent’s goal, but also a lot of space, which was also shown at 2-0. The risk Favre consciously took with the two pushing backs turned into a boomerang. Hakimi had to go a very long way in the situation to close the center. In addition, Dortmund did not manage to gain access to the opponent in such a way that they could prevent the dangerous switching actions of Atletico. They were not able to do this even with the goal they scored against them, so Madrid could well convert a changeover action into a goal.

Dortmund came in 90 minutes to no goal shot on the goal of Atletico. In general, the BVB lacked the delightful joy of playing in the past weeks and the variability in the last third. Dortmund did not manage to get into the back of Atletico’s defence, but often lacked the deep runs. The Favre team was also too impatient and did not prepare for the attacks as consistently as they did last time. They made too easy mistakes against a very well adjusted team from Madrid.

We will see how Dortmund deals with this defeat, as the next top match is already on the programme for the weekend.