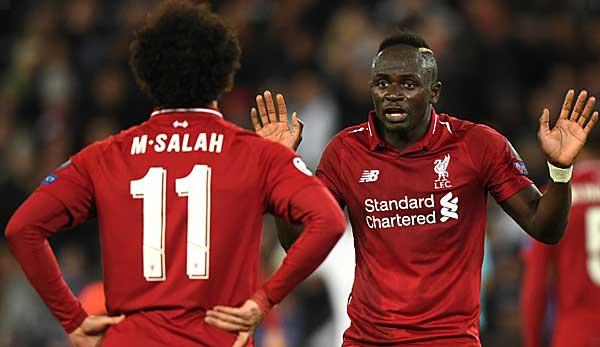 Fabian Hürzeler is one of the greatest talents in German football. This season, Hürzeler will take a close look at selected highlight games of the Champions League for SPOX. Today’s tactics column is about the follow-up of the crash between PSG and FC Liverpool.

Paris played against the ball in a 4-4-2 and tried to put the opponent under pressure early. The two French sixes, either Marco Verratti or Marquinhos, alternated time and again with Liverpool’s defensive midfielder Jordan Henderson, so that the visitors did not have any shallow starting positions. Jürgen Klopp’s team usually only had the long ball at the opening of the game.

In possession of the ball, PSG acted in a 3-5-2, with Marquinhos falling into the final chain and Verratti acting as the only six. Neymar had a lot of freedom in the offensive and came as usual often over the left side or from the left half space. On the other side, Angel Di Maria usually positioned himself in the right hemisphere or also completely switched to the side, where he created several overpaying situations with his back man, right-back Thilo Kehrer.

The Paris three-legged chain would have given Liverpool the opportunity, with their own possession of the ball, to press the three central defenders against each other. However, the PSG defenders were disciplined and moved back to the back row to prevent a possible offensive pressing of the Reds. For this tactical variation Klopp would have had to push his two outer defenders far forward, but at the same time the space behind them would have become free, which in turn would have increased the susceptibility to counterattacking.

Liverpool started the match very low in a 4-5-1 and lurked for Paris’ mistakes, only to switch quickly via the two attacking outside players Sadio Mane and Mohamed Salah. Out of the game, the Reds attempted to outnumber Neymar and force him into his unpopular defensive work. This enabled Liverpool to cover the first two lines (attack and midfield) from Paris. In the last period, however, the creativity and the necessary move to the goal was missing.

Marco Verratti presented Liverpool with great problems. As the Italian was the only six-placed player in PSG possession, Liverpool was often unaware of which midfielder was to blame when he received the ball. Verratti could thus initiate the moves behind the opponent’s first line and boost the game forward. As a result, PSG took the lead in the middle of the field, resulting in gaps. PSG coach Thomas Tuchel often put his front row around Neymar, Kylian Mbappe and Di Maria in the spotlight, which increased their dominance there.

Especially Neymar attracted two opposing midfielders and played again and again a steep gossip combination with Verratti. It was from such a situation that the 1-0 win was born, when Neymar had too much space in the centre and was able to get the ball through to the last period with a simple double pass, where he used Mbappe to prepare Juan Bernat for the lead.

After the goal, the statics of the game changed, Paris withdrew more into a deeper midfield pressing and then tried to go into the switching game. Liverpool, for example, had more ball possession, but they did not get to the Paris goal dangerously. Paris defended very aggressively and then had ball wins again and again in his own half. Then they switched mostly over their high individual class with Mbappe, Neymar and Cavani. It was noticeable that Mbappe dropped to the left after winning the ball, in order to then have more space and time to play the ball dangerously in front of the goal of Liverpool. He also lured a Reds central defender out of the centre, creating some good scoring opportunities (as in the 31st minute). Neymar’s 2-0 win was also the result of such a move.

Overall, Liverpool played a very weak first half. The otherwise offensive Reds did not manage a single shot on goal. The fact that the Klopp team nevertheless went into the break 1:2 was due to PSG defensive player Marquinhos, who with a loss of ball in the forward movement in injury time introduced the situation that led to the penalty kick caused by Angel Di Maria.

Liverpool generally positioned his backs relatively low, with Salah and Mane on the half-field for their attacking outfield. From there, they initiated depth runs again and again in order to get into the back of the Parisian outer defenders. In addition, their position created a lot of space for the outer defenders behind them. Especially Andrew Robertson on the left side became more active in the second half at the beginning, played in this space and often crossed.

Liverpool also had better access to the Paris counterparts at the start of the second period, and were able to quickly recapture the equipment in the event of ball losses, thus preventing PSG from attacking. Liverpool’s chances for a goal remained scarce, however, as the 4-4-2 led by Tuchel remained stable. Although the Reds would potentially have had a 3-2 numerical advantage in the centre, the first offensive variant was usually to pull a central midfielder onto the outer lane to create a numerical advantage there and to initiate the attack from there.

However, there was no good sixth in the game, Liverpool with Jordan Henderson, who is better known as a scrapper, but not in his ranks. The visitors’ offensive efforts were further complicated by Tuchel’s inclusion of defensive player Dani Alves, who closed the gaps on the right side of the PSG caused by Angel Di Maria’s not exactly intense defensive behaviour.

Liverpool have never been able to bring their undoubted potential to the pitch in this top match. The concentrated offensive power around Salah, Mane and Roberto Firmino did not give a clear goal chance over 90 minutes. Paris, on the other hand, earned this success with a very good first half. Especially the compactness of the 4-4-2 was the key to success.

Tuchel has managed to teach his offensive creative players to win defensive games. They were also not too sorry to go long distances to their own half to do defensive work there. So Thomas Tuchel had a successful revenge in the end after the 2:3 first leg bankruptcy, through which PSG now stands with one leg in the round of 16. Liverpool, on the other hand, must now win their last group match against Naples in front of their own backdrop in order to enter the round of the last 16.