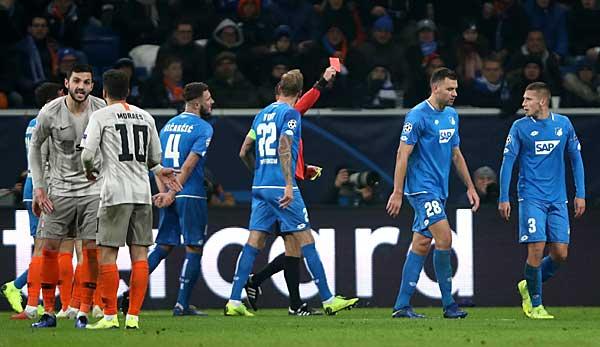 The Kraichgau team simply don’t have a premier class: TSG Hoffenheim missed the premiere victory in the Champions League at the fifth attempt. The TSG failed in the group stage due to the 2:3 (2:2) against Schachtjor Donezk, and the chances for the “consolation prize” Europa League are also extremely bad.

Andrej Kramaric (17.) and Swiss World Cup participant Steven Zuber (40.) scored for Hoffenheim. Ismaily (14.) and Taison (15./90.+2) were successful for Donetsk. TSG striker Adam Szalai saw the yellow red card because of repeated fouls (60th). In two weeks’ time, the Hoffenheimers will have to play at Manchester City – and hope to at least displace Schachtjor from third place in Group F in the long-distance duel.

Before the match, TSG coach Julian Nagelsmann’s main concern was to get the defensive weakness of his team under control. “Basically, we just have to defend better, that’s the key,” said the 31-year-old, whose team had already conceded nine goals in the previous four games.

The professionals had obviously not listened to their coach. The hosts, who were missing Dennis Geiger, Benjamin Hübner, Nadiem Amiri, Lukas Rupp, Joelinton and the locked Kasim Adams, were completely unfocused at the beginning. The weak initial phase of the Hoffenheimer was immediately punished by Donezk.

With the two fast goals the defensive behaviour was again unsatisfactory. Captain Kevin Vogt, Harvard Nordtveit and international Nico Schulz did not cut a good figure. Nevertheless, the Kraichgau team was only briefly shocked by the 22,920 spectators in the Rhein-Neckar-Arena. Kramaric brought the TSG back into the game after Ishak Belfodil’s preliminary work with a remarkable jack.

Ten minutes later, the Hoffenheim side were lucky to have Junior Moraes put his header right next to the TSG goal (28th). Not much happened after that scene. The Nagelsmann eleven did almost nothing in the offensive. There was hardly anything to be seen of playful wit and creativity. The compensation by Zuber’s header was rather a product of chance.

At the beginning of the second half the Hoffenheim team increased the number of strokes and put the Ukrainians under pressure. The lead for majority shareholder Dietmar Hopp’s club was in the air. However, the urge period ended without TSG hits.

Instead, the Hoffenheimers only had ten men left on the pitch, as Szalai had two fouls within a short time, which were punished by referee Ivan Kruzliak (Slovakia) with yellow-red.

In spite of the undernumber, Zuber almost shot the Hoffenheim team into the lead, but the Swiss only hit the crossbar (69.). Afterwards, the Kraichgau team pushed on to the third goal, but with time their strength dwindled. Just before the final whistle, the guests hit the post. A little later Taison destroyed all dreams of the Kraichgauer.