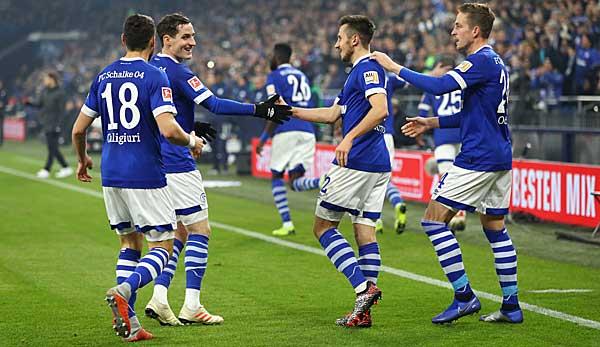 18 minutes of play after 17 compulsory games: Steven Skrzybski had to wait a long time for his chance in his first season with FC Schalke 04, but when it came on Saturday against Nuremberg, he used it and tied a double pack. Now, before the Champions League match of the Schalkers in Porto (live on DAZN and in the LIVETICKER from 9 p.m.), he is suddenly the hope bearer.

“Anyone who knows me knows that for me these are moments when you don’t know what to do.” Steven Skrzybski makes no secret of the fact that he doesn’t like being in the limelight so much. But last Saturday even he couldn’t just steal away.

When Domenico Tedesco replaced the 26-year-old in the 88th minute at a score of 4:2 from FC Schalke 04’s point of view against FC Nürnberg, the arena rose to Schalke and donated Skrzybski standing ovations and said goodbye to him with chants towards the players’ bench.

“You can’t describe something like that. These are things you might dream of,” Skrzybski later said about his substitution. Contrary to Skrzybski’s claims, the word “dreamlike” for his Schalker debut could hardly be more appropriate after 17 games of duty in which he played for only 18 minutes.

Skrzybski tied his first Bundesliga double pack against the club and was thus the unexpected match winner of the royal blues. Unexpected because his debut in the royal blue opening formation was more of a stopgap, after all Tedesco had to replace two constants in his hitherto unconvincing offensive section after the long-term failures of Breel Embolo (metatarsal fracture) and Mark Uth (tendon injury).

The fact that this very offensive suddenly worked and Uth and Embolo were hardly missed was due in particular to the fact that the fast Skrzybski and the worker Guido Burgstaller ideally complemented each other as a dual leadership. Five goals were the bottom line on the plus side. A novelty for a Schalker team under Tedesco.

“Finally, everyone said again and again that we were scoring too few goals – and the criticism was justified. But that’s all the better because we scored more than one or two goals,” said the former Union Berlin crowd favourite.

These are the sentences that made sure that nobody really resented the change in Berlin during the summer. For Skrzybski, the “we” is in the foreground; after all, he is one who “prefers to cheer with the team” rather than to put himself in the best light.

It was the same at the Alte Försterei: Last season Skrzybski played his best season so far, scored 14 goals and prepared five more. Union, on the other hand, clearly missed their goal of advancing to the Bundesliga and even had to worry about maintaining their class until the penultimate matchday.

There was such a large gap between the sporting development of the club and that of the player that Union Sports Director Oliver Ruhnert was right to state in the summer that the change from Skrzybski was “not surprising”. Especially since it was the heart club that knocked on the door.

“As a child, I actually slept in Schalke bed linen,” Skrzybski said in an open letter to his former teammates and Union fans. The reason for this was not a dripping with clichés explanation for his move away from the club for which he had already played at the age of eight. It was a letter of motivation before the cup game of the Iron Ones on 31 October against Schalke’s archrival Borussia Dortmund, which he concluded with the words “One always has a small chance”.

This “small chance” was Skrzybski with Schalke at the time, when he wrote these lines, however, remained locked. A short mission in the Bundesliga and 13 minutes in the Champions League against Galatasaray. That’s all he’s gotten from Tedesco so far.

“There was always something in between,” said the Schalke trainer last Saturday, explaining the long renunciation of Skrzybski. “There was no question that Steven would get the chance at some point, but one must not forget that he was injured in between,” sports director Christian Heidel rightly noted.

What initially came across as a “small muscle fiber tear” (Tedesco) cost Skrzybski a total of 8 of the previous 18 compulsory games. Eight small chances to prove yourself, if you will. This only came about when Uth, Embolo and Cedric Teuchert injured three offensive players who had previously been given preference over Skrzybski. And this, although “Stevie” had always accelerated during training, as Tedesco himself admitted.

The fact that Skrzybski took this chance with his double pack will remind him that he wore the blue jersey with the number 22 on this Saturday evening. “This’ll be on the wall at home,” said the 26-year-old striker. In view of the still tense personnel situation in the offensive and Skrzybski’s appealing performance, that jersey could already get company on Thursday. A bright yellow one, maybe.

On Wednesday evening, the squires will be guesting in the Champions League at FC Porto (live on DAZN and in the LIVETICKER from 9 p.m.), which usually plays at home in blue and white dress. After the appearance at the formal Portuguese record champion (seven victories in a row), sports director Christian Heidel says that “wintering in the Champions League should be certain”. And according to Skrzybski, he would like to help, preferably from the beginning.

“We rotate a lot,” he said, referring to his new role as Schalker’s hope bearer in the offensive: “I’m curious to see if I can play.” Tedesco also left it open how many players he would exchange this time, but hinted at it in a meaningful way: “If you rotate a lot, the automatisms go a bit further.”

The “small chance” with which Skrzybski had already turned to his iron men from Berlin is no longer a small one for him personally. After all, he is suddenly important to Schalke.