Champions League: Seals with the double “seal”: An evening for Bavarian nostalgics 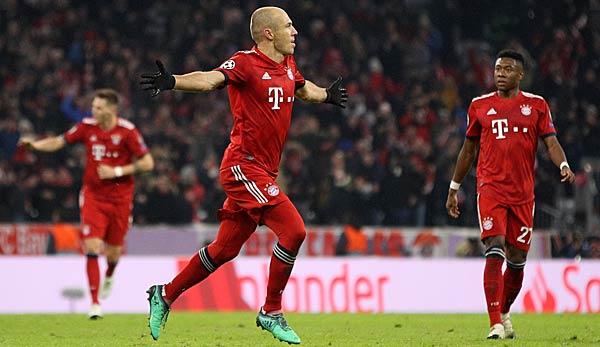 Arjen Robben successfully unpacks his “Signature Move” twice in the 5:1 against Benfica. His goals are reminiscent of the good old days – just the thing for FC Bayern, who are in crisis.

“I dreamed about you, about our Wembley night. We won the cup, climbed the throne, Arjen did it,” sounded from the south stand at 21.15 hours through the Allianz Arena.

Lines melodically based on the former hit song by Matthias Reim, who established themselves after winning the Champions League five and a half years ago against Borussia Dortmund in the venerable London stadium. Arjen Robben had scored the 2:1 victory shortly before the end of the match and at the latest set himself a monument in the Bavarian capital.

What had inspired the traditionally only group of real mood makers at Fröttmaninger Rund to pay homage to the Dutchman on this grey, frosty November evening a quarter of an hour after the kickoff with just those nostalgic lines?

Robben had done it once again, after what he felt had been an eternity: The experienced player, who had recently been identified by many experts as the face of the Bavarian crisis together with some other established players, first and foremost Franck Ribery, started his dribbling on the right side outline, fooling (with a bit of luck) three Lisbon opponents at the same time, in order to get a full shot with his left foot in the long cross corner a few seconds later.

The “Robben-Move”, as the tempogespickte dribbling from the right to the middle is sometimes called, advanced to the much-quoted Brustlöser. This irresistible composition of speed, technical finesse and placed finish, which was repeatedly declared “hardly to be defended”, was last admired less and less in Munich. On this evening – as if the 34-year-old had only been waiting for the duel with Benfica over the past few months to dig his legendary movement out of the moth box – Robben caused a double sensation.

17 minutes after his first stroke he was sent on the journey by Thomas Müller, this time he “only” had to deal with one defender, namely German Conti, pulled again inwards, feinted briefly and put the ball intolerably into the short corner. Many might have felt reminded of the good old Bavarian times when such scenes were almost weekly routine.

At the latest, when the other much criticized oldie, Ribery, also rewarded himself for his committed performance, got the 5:1 final score, those who hold it with the record champion and these days think melancholically of the successful past, probably had a temporary Deja vu experience.

Now, however, it should be noted that the opponent really didn’t have much to oppose, serving more as a sparring partner than as a serious competitor to the king’s classes. With regard to the condition of the currently shaky German giant and the associated discussion around coach Niko Kovac, only a victory that calms the minds at Säbener Straße for the time being. At least for a few days.

Accordingly, Robben first went into his controversial coach when he stepped in front of the journalists in the Mixed Zone with a silver aluminium rolling case: “I was especially happy for our coach today. As a human being. He really deserves that,” said the man of the game, and added: “I hope we’ll continue like this.” Only afterwards did he devote himself to his own performance: “I feel good, that was a nice game today. “An evening like this is fun, of course.”

However, Robben also knew how to classify the performance in terms of sport, and with regard to the games still to come, which will be put to the test on a weekly basis, it became clear what the future of his club in the current season will be: “This was a game now, now it’s quiet for the time being. But if we don’t win on Saturday (in Bremen, 15.30 in the LIVETICKER), then there’s trouble again. An evening like this will of course help, but we will have to confirm this in the coming weeks.”

He thus spoke for the team, in which a “good atmosphere” prevails, as Robben clarified, but also for himself. In fact, a decent performance against alarmingly weak Portuguese citizens does not conceal the deficits that are still present at the FCB and even at the outdated right-wing extremists. Obvious construction sites, on several fronts at once, which have been discussed up and down in the past days and weeks.

The means to help cope with the current emergency are “to show greatness, stand up together and move on,” Robben concluded. He himself went ahead on this grey, frosty November evening, took several small, dynamic steps in the right direction and followed his classic “Signature Move” with two goals worth seeing. Just like not so long ago, in the long, glorious era of which Bavarian football nostalgics were allowed to dream for a moment on Tuesday.