Champions League: No goals: Weak BVB books round of sixteen 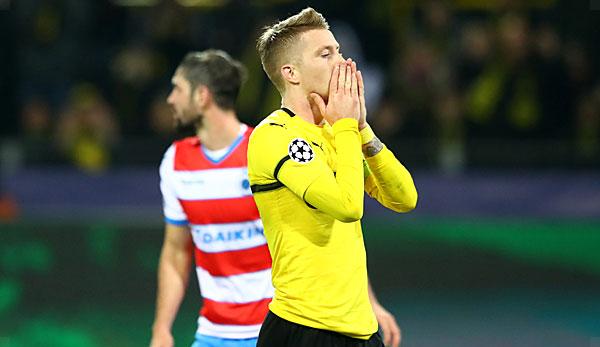 Despite a very poor performance, Borussia Dortmund already won their ticket to the round of sixteen on the 5th matchday of the Champions League group stage. BVB did not exceed 0:0 against FC Brügge and thus lost the good starting position for the group win.

The Dortmund team struggled in their usual 4-2-3-1 against well-organized Belgians, who took the BVB’s pace with eleven men in their own half. The Bundesliga leaders then put themselves to the test of patience, took little risk and found little depth in the game, both on the outside and in the centre via Alcacer.

So Pulisics big chance remained after a strong ball from Akanji into the top on Reus the first and long time only big chance of the game (10th). It took more than 20 minutes of the unattractive shifting until the BVB appeared again dangerously in front of Bruges-Keeper Horvarth: However, the hundred percent Reus pushed past the goal was more a chance product than an opportunity played out (32nd).

After the break, the BVB got better into the direct game and combined in the first ten minutes twice worth seeing over Reus, Alcacer and Guerreiro into the sixteen of the Belgians. After just under an hour, however, the BVB fell back into old patterns and only seldom let its own skills shine through. Instead, it was the Belgians who almost took the lead after a catastrophic mistake of the substitute Sancho (74.).

Favre brought fresh blood to Hakimi and Sancho for the left outer lane, but his changes didn’t work. But the goalless draw is still enough for the BVB to get ahead. After the poor performance, however, the group victory has moved into the distant future.

He radiated enormous stability and had by far the most ball actions of the Dortmund team (151) together with Zagadou, who was also a good side man. Played in the first round a strong ball on Reus, which should actually lead to 1-0. In addition, lost only one of his seven duels.

Was not in the game at all in the first heat, was not involved in any shot on goal and was not in a duel won. After the break, initially somewhat improved and more diligent, but mainly in the role of the preparer and not the executor. Haderte in the further process again and again visibly with the game and seemed extremely dissatisfied. His graduation in the 86th minute, when he aimed at the third floor of the sixteenth, freestanding, was significant.

Didn’t have any problems with the game management at all, but this was also due to the fair game. Had a clear line and was right in both warnings against Alcacer (BVB) and Denswill (Bruges). A sovereign appearance of the impartial.