Champions League: Nagelsmann: “This is an absolute scandal” 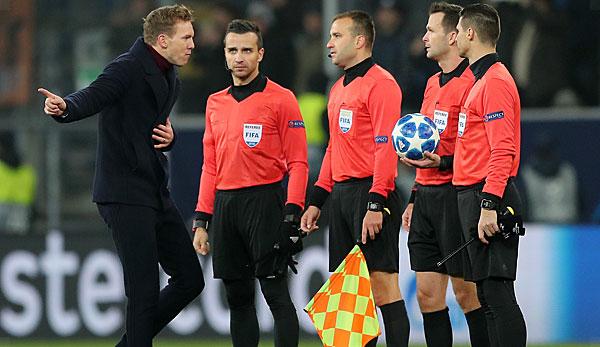 Julian Nagelsmann has sharply criticized the referee’s performance after the defeat of TSG 1899 Hoffenheim against Shakhtar Donetzk. Niko Kovac was relieved after the victory of FC Bayern Munich.

Here you will find all voices and reactions to the CL games on Tuesday.

… the game: “If we make the Lucky Punch 3:2, the opponent won’t come back. We’re annoyed, of course, we had two big chances. At this level, you just need the quality to put these things in. I can’t blame the boys. They’ve been working real hard, even outnumbered. They gave it all they had.”

… the dismissal of Adam Szalai: “The yellow-red card is an absolute scandal. The level of referees is not at Champions League level.”

Steven Zuber (Hoffenheim): “Everyone here in the stadium is very disappointed. In the end, it’s the little things that decide and we have to learn from them.”

… a conversation with Uli Hoeneß: “I have not yet spoken with Uli Hoeneß. We may have seen each other two or three times after home games, but I think we’ll catch up today.”

… Hoeneß: “I think he will first congratulate me on my performance, because we are doing very well today.”

… the somewhat weaker second half: “I think he can turn a blind eye to [Hoeneß]. (laughs)”

… the veterans Robben, Ribery and Lewandowski, who all scored goals: “I wish they were younger every eight years. But I’m also so glad to have these guys. That’s what I was when I was new here at FC Bayern. It is particularly important to have such leadership players.

… the statement that the team also sent to him as coach: “That was a statement for the team itself. They’ve shown they can still do it. Now they’ve seen that they can. I hope they’ll take that with them in the future.”

… the significance of victory for the Bundesliga: “We think from game to game. It will be difficult in Bremen. What’s bothering us in the Bundesliga is the fact that we couldn’t win the last three home games after the lead. We don’t have to talk about first place now, we have to preserve what we played today. We’re not gonna be able to skip five places at a time now.”