Champions League: Kovac in search of the Mia san mia: With eggs against the trend of antiquity 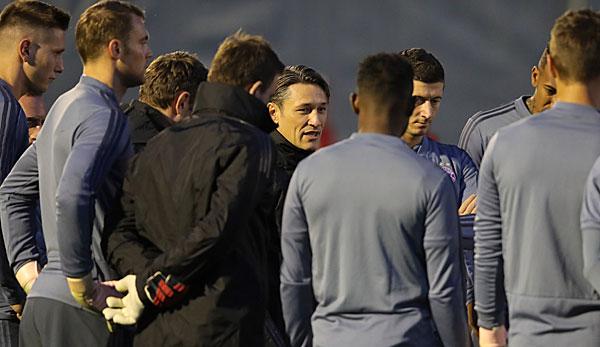 First the compulsory task in the premier class against AEK Athens, then the league showdown at Borussia Dortmund: Niko Kovac can win a lot in the next few days, but also lose. The counted coach of FC Bayern Munich is not looking for better results than last time. He’s looking for the base for it: the Mia san mia.

A mischievous grin could be elicited from the more serious Niko Kovac these days shortly before the end of the press conference before the Champions League group match against AEK Athens (21 o’clock in the LIVETICKER). “Now we are already in antiquity,” said the FC Bayern coach, making a gesture as if he were wondering a little about the words he had just lost.

To appeal to the community spirit of the record breaking champion in times of moles and Instagram-Wüterichen, Kovac had slipped into the role of history teacher for a brief moment. It should not degenerate, not end like once with Caesar or in Troy, was the core statement of the 47-year-old. No suspicion, no intrigue. Because: “Football is like a family. When a family doesn’t stick together, it breaks up. And when it separates, it becomes difficult.”

It wasn’t a fire speech that the freshly shaved trainer gave in front of the more than 50 journalists in the Allianz Arena. Kovac spoke his words with caution. But the message arrived: The current behaviour on Säbener Strasse, characterised by mixed results, cramped football and trouble spots at all corners and ends, puts a strain on him.

This impression also didn’t change when he expertly smiled away the whirlwind of Thomas Müller’s wife Lisa’s criticism (“I’m not a resentful person, the subject is done for me”), dismissed the cabin internals carried out to the outside as banal (“I think you make an elephant out of a mosquito”) and affirmed that the atmosphere within the crew is actually “good”.

Kovac, this became clear on Monday afternoon, misses the Mia san mia at FC Bayern, the unconditional will to be fully there for each other. It doesn’t even have that much to do with his own person. Despite the statistically weakest season in eight years, he enjoys the absolute support of Karl-Heinz Rummenigge, Uli Hoeneß and Hasan Salihamidzic, who are in charge of the team. And he doesn’t need them after every game on black and white.

Rather, he is disturbed by the lack of focus on the essential: football. Defensive carelessness like the 1:1 against SC Freiburg is just as atypical for FC Bayern as the lost ease in the last third of the court. Kovac believes that the negative mood in the club’s environment that has been going on for weeks has also affected his players.

“If a footballer starts thinking too much, then the energy is missing”, he said and presented at the same time a simple, but appropriate solution: “If you have positive experiences, then you don’t think negatively. We might just have to make a difference with three or four goals. Then the knot loosens.”

The good thing for him is that as a coach he can help his players to work on positive experiences. The bad: After weeks of poor food with many dampers instead of a clear victory, at least outsiders don’t really know anymore whether he is really capable of it. Although Kovac still has advocates behind him, he needs convincing results on the grass as soon as possible.

And not only with goals and the much quoted game wit, but also with “eggs”, as Joshua Kimmich demanded 15 years ago in reference to Oliver Kahn’s legendary outburst of rage, “so that you can see again that we are FC Bayern”.