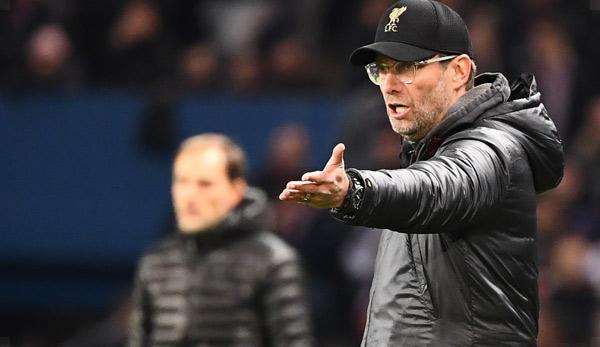 While BVB coach Lucien Favre was satisfied with reaching the round of sixteen despite the weak performance of his Dortmund coach, the Schalk opponents showered Porto with praise. Jürgen Klopp did not only want to tie the 1:2 bankruptcy of his Reds to the referee, but criticized his game management and also sent a few side blows to the PSG players.

SPOX has combined all the votes for the Wednesday Champions League matches with German participation, as well as for the fireworks between FC Liverpool and Paris Saint-Germain.

… the defeat against PSG: “Paris scored two goals today, we only scored one and that’s why we lost. They went full throttle right away because they had to win. But we also knew that if we regain a little game control, the game will open again. After the goal we tried everything again, but unfortunately we were not clear enough.”

… the referee’s performance and the behaviour of the PSG players: “There were felt 500,000 interruptions and the referee still thinks he did everything right. In England I think we are the third fairest team, tonight we looked like butchers. The PSG players were on the ground all the time and that of course made the guys aggressive in a negative way. If you like, it was very clever tactically, because the referee allowed it. Now we have to live with the 1:2, which is no shame here in Paris. But it still feels like shit. Now we need Anfield Road again.”

… the questionable hesitation of the referees before the penalty: “That’s the problem I have now. Now you need my name so you can write ‘Klopp says, Klopp says, Klopp says’. But I saw the penalty kick, it was a clear decision and he didn’t even whistle. I can’t figure out how that happened. And then I see Marco Verratti’s foul and I think, “Wow! Jersey pulling from one of our players is the same suit as the foul from Verratti? These are things that are difficult to comprehend. But that’s life, that’s what we have to deal with in our business.”

Thomas Tuchel (coach of Paris Saint-Germain): “We are very relieved. I am especially happy for my players when I see how much heart and energy we have shown on the pitch. Then it breaks out of me because I always wish that we would win games like that.”

Thilo Kehrer (Paris Saint-Germain): “We have shown a very strong mentality today. In the end, we’re glad to have victory in our pockets. We had a very good plan and played in exactly the rooms we know Liverpool doesn’t like to defend there. We did a good job as a complete team.”

… the entry into the round of sixteen, despite the weak performance: “We are happy about the round of sixteen. We have thus achieved one goal. It was no surprise to me that the game came like this. Bruges defended very well, as it did three months ago. Surprisingly, they played 4-4-2 and we just didn’t find the gap. Sometimes we should have played it a little faster and more precise. But this team won 4:0 in Monaco, they can also counter.”

… the injuries of Abdou Diallo and Axel Witsel: “It works. That’s all I can say”

… the weak offensive performance: “We played out a few things well. But it was certainly not our best game. Bruges has concentrated mainly on defending. We actually played it patiently and didn’t lose our nerves.”

… the reduced chances of winning the group: “Atletico still has to win first. In the end, we didn’t want to risk Bruges getting any further. I think that’s okay.”

… about the game: “We missed two hundred percent chances in the first half and then it got harder and harder for us. We were too slow to let the ball go, but now it’s primarily qualifying for the round of sixteen.”

… about the judgement concerning the assassination attempt on the BVB: “We are happy as a club and especially the players who were sitting in the bus are happy that a final stroke has now been made. We had complete confidence in the German judiciary and everything is fine.”

Domenico Tedesco (coach Schalke 04): “We wanted to win. It was also seen in the line-up, we were rather offensive. We are disappointed with the result. Porto were better, they did almost everything right and are the best team in the group. We’ve had too many ball losses today, but it’s also just a lot of postage.”

Ralf Fährmann (goalkeeper Schalke 04): “Porto is a really, really good team. We felt that today. We deserve to lose.”