Champions League: Highlights TSG Hoffenheim against Shakhtar Donezk: The TSG is out – All goals in the video 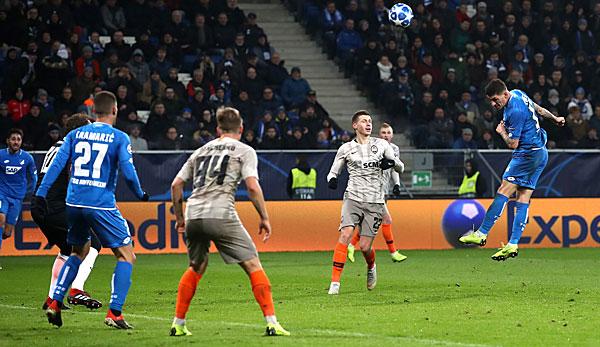 TSG Hoffenheim lost to Schakhtar Donezk 2:3 (2:2) on the fifth matchday of the Champions League. Here are the highlights of the game in the video.

Hoffenheim’s final match in the group stage will be on 12 December at Manchester City.

The match between Hoffenheim and Donezk was shown live and exclusively on DAZN. The streaming service broadcasts most of the matches in the premier league live and in full length. The games are available in Re-Live as well as the highlights of all games shortly after the final whistle of the respective game.

The Netflix des Sports also has the Europa League, Premier League, Primera Division, Ligue 1 or Serie A in its programme as well as many other sporting highlights. For example the US top leagues NFL, NBA, NHL and MLB as well as darts, tennis and hockey. Click here for the free trial month.

The TSG Hoffenheim cannot be a king class. TSG lost to Schakhtar Donezk with 2:3 (2:2) and is thus also without victory in the fifth Champions League game in the club’s history. With the defeat Hoffenheim failed in the group stage and has no chance for the round of sixteen. Also the chances to the third place, what the Euro League would mean, are bad.

After 15 minutes it was already 2-0 for Donezk. Ismaly and Taison shocked the TSG with a double strike. But Andrej Kramaric and Steven Zuber were able to equal the score before halftime.

By the 60th minute, Hoffenheim was only ten. Adam Szalai saw the yellow-red card after repeated fouls. Shortly before the end, Taison scored his second goal in injury time to cause the 2:3 defeat and thus shot the Kraichgauer out of the competition.