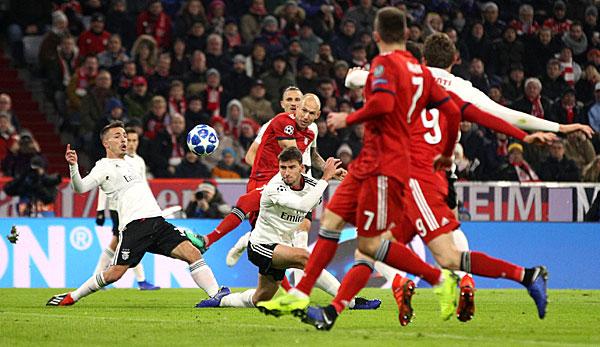 FC Bayern Munich defeated Benfica Lisbon 5-1 on the 5th matchday of the Champions League. See here the goals and highlights of the game in the video.

FC Bayern will play their last group match on 12 December at Ajax Amsterdam.

In Germany, the match between Bayern and Benfica could only be seen on pay-TV channel Sky, all other matches on DAZN. In Austria DAZN broadcasted the game. The two providers share the Champions League rights this season.

The highlights of all Champions League games are available on DAZN shortly after the final whistle of the respective match, and all matches in re-live, including the match between Bavaria and Benfica, are also available there.

DAZN will also be showing the entire Europa League as well as Premier League, Primera Division, Ligue 1 and Serie A games and other sports such as the top US leagues NHL, NFL, NBA and MLB. Click here for the free trial month.

Thanks to Arjen Robben and Robert Lewandowski, FC Bayern Munich clearly won 5-1 against a defensively weak Benfica Lisbon. Above all seals let their old qualities flash again. In his usual manner, the Dutchman scored the first two goals for the Bavarians.

After the break there was a small setback. Gedson Fernandes scored the intermediate 3:1. Shortly afterwards Lewandowski restored the old distance. As at 3:0, the Pole headed the ball after a corner of Joshua Kimmich to 4:1 into the goal.

The final point to 5:1 was set by Franck Ribery. The Bavarians are now safely in the round of sixteen.