Champions League: FCB after victory against Benfica: Everything under control again on the sinking ship? 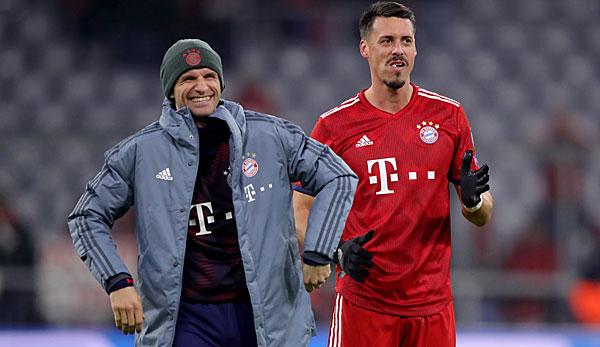 Thanks to his 5-1 victory in the Champions League against Benfica Lisbon, Niko Kovac remains coach of FC Bayern Munich for the time being. Afterwards it was about moles, ships and the question: Does it still work between this crew and this coach?

Just before midnight there was a wild back and forth in the Mixed Zone of the Allianz Arena. At first President Uli Hoeneß marched in and passed exactly the place where he had announced last Saturday to question everything. This time he merely said that he would come back for further statements in a moment. He actually did – but only to announce that sports director Hasan Salihamidzic would come instead.

When Salihamidzic arrived a little later, he first whispered in his role as Brazzo, grinning: “Servus! Salihamidzic joked around a bit and even helped to adjust the microphones of the radio and TV journalists accordingly. Salihamidzic was then seriously asked how coach Niko Kovac stood, whereupon he switched into his role as sports director and said into the perfectly adjusted microphones: “The evening speaks for itself”. The question was, does he really?

Yes, FC Bayern won 5-1 against Benfica. Yes, FC Bayern qualified early for the last sixteen of the Champions League. Yes, even the so-called oldies were shining: Arjen Robben (34) scored two goals, just like he used to, and Franck Ribery (35) also scored one. Yes, the defensive was relatively safe (against a completely harmless Benfica). Yes, Kovac has won his supposed game of fate and remains FC Bayern coach for the time being.

But for how long? What if FC Bayern does not win at Werder Bremen on Saturday? Was this victory over Benfica really the turning point, or just the last postponement of an inevitable separation? After all the uninspired attacking performances, the individual mistakes in the defence, the slumps in the final stages and last but not least the statements of Hoeneß, the idea that it works in the long run between this team and this coach seems somehow difficult at the moment.

This Tuesday evening, however, the players sent signals that they might still believe in their coach after all. After Ribery had exaggeratedly cheered his goal to 5-1, Kovac immediately switched him out and the two of them embraced each other for seconds on the side line. For Kovac this scene was “clear enough” proof of the intact relationship with Ribery – and the team in general.

According to the picture, Ribery was summoned to Hoeneß and Karl-Heinz Rummenigge on Monday together with captain Manuel Neuer, Thomas Müller and Robert Lewandowski. The quartet is said to have criticized Kovac among other things. Here the embrace before the eyes of all, there the alleged criticism behind closed doors?

Ribery did not comment, but the remaining three representatives of this quartet did. Lewandowski was asked whether the team had played for Kovac and he replied: “Yes, of course. We’re behind the coach.” Neuer said, “Of course the team plays for the coach.” Only Müller expressed himself a little more reserved: “We as a team naturally want to show that we stand behind the coach, but it was not a game for the coach. We play for the club and for success.”

And then he said another interesting sentence: “Although these are stormy times, we try not to let ourselves be completely split”. Not quite splittable. The splitting has therefore already started. It sounds like the attempt of a last scramble between this coach, who is inexperienced at the highest level, and this team, who is experienced at the highest level, perhaps even too experienced.

One who successfully trained this team – when it may have been experienced just right – and then again – when it may at least not have been experienced – is Jupp Heynckes. Before the match against Benfica, the 73-year-old pensioner from his farm at the other end of Germany, who is already very experienced himself, had spoken up. “Niko Kovac doesn’t just have it in Munich,” Heynckes told the Westdeutsche Zeitung: “There are lovely boys there and divas.”

At least one of them is currently passing on internal information to the picture at considerable regular intervals, thus damaging his coach. It is probably rather one of the divas than one of the dear boys, in the technical language one calls it also mole. “We’ll take care of that,” Salihamidzic said, referring to the tracing of this mole. “You can imagine if I caught him, what that would mean.”

A closing of the molehill would be conducive to the atmosphere in the cabin. The mood of the team, however, seems to be in disagreement anyway. “Of course, the mood is less good in such times of crisis,” said Müller, shortly after Robben had announced: “The atmosphere within the team is good.”

By the way, Robben was the only player who solidarized with Kovac this Tuesday evening without being asked. “I was especially happy today for our coach. He deserves that as a human being. He’s with us,” he said. But maybe Robben was just a bit euphoric about one of his best games in a long time.

With his two early goals, he had put his team on course – and with it his coach. Neuer didn’t say for nothing afterwards, “We’re all in the same boat.” When this boat called FC Bayern, which is actually a tanker, sailed towards a sure victory in the second half, the fans of the south curve started to sing Jürgen Drews: “Everything under control again! Ohohoho! On the sinking ship! Ohohoho! Don’t panic on the Titanic! Land in sight, we don’t die!”

As is well known, a sinking ship must be the last to leave the main person in charge – whether this will end before drowning depends on how quickly, well and flawlessly its sailors advance the evacuation or even rescue of the ship beforehand.